21 Vintage Photos (and Paintings) of Royal Dogs Throughout History

by Lauren Cahn: It’s not just Queen Elizabeth II that adores her doggies. Throughout history, members of the British royal family have

had their canine companions close by their sides, and we have the images to prove it. 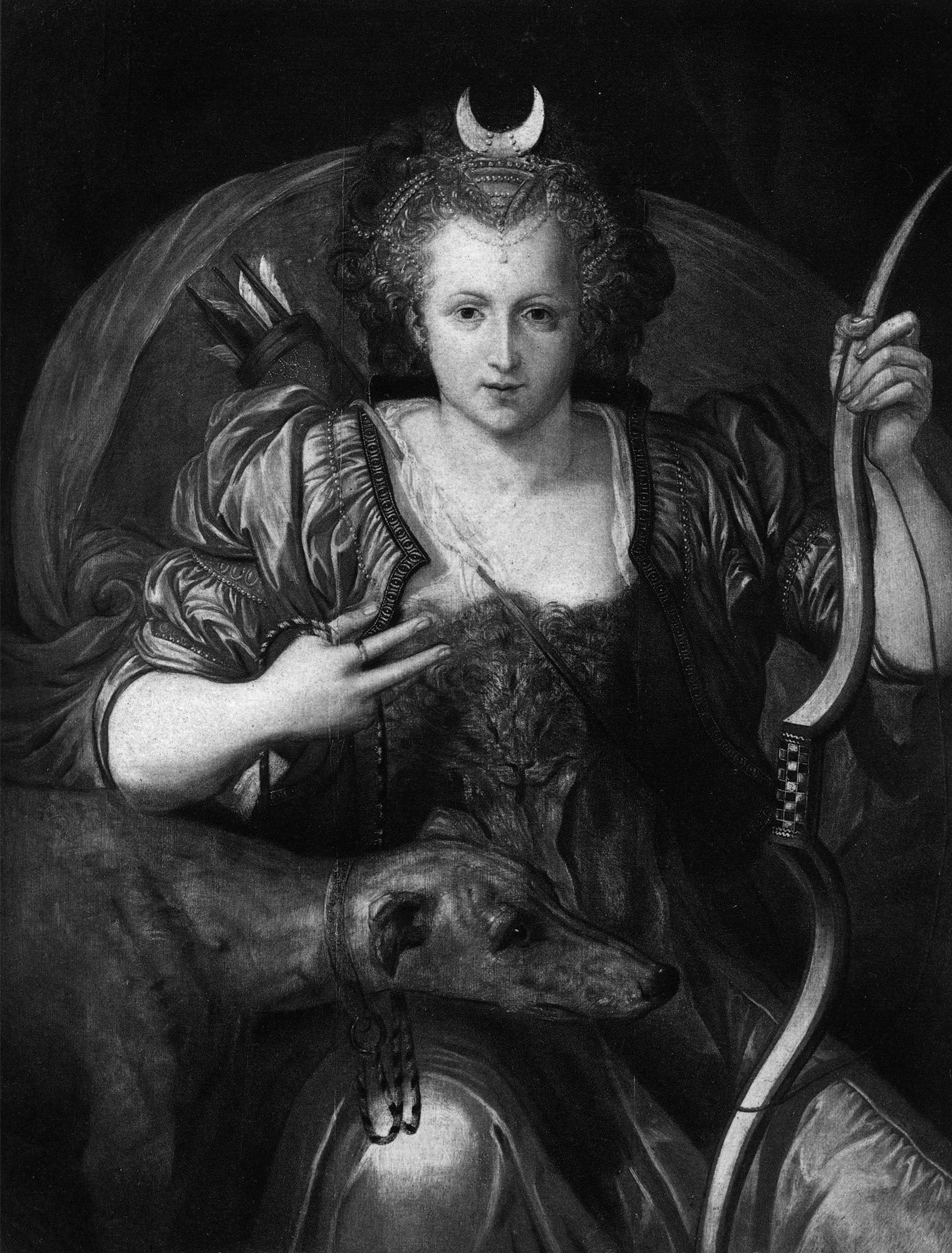 Queen Elizabeth I is pictured here, fashioned as Diana, the Goddess of the Hunt, with what is assumed to be her beloved canine companion. Her father, King Henry VIII, was also a dog lover, with a particular fondness for beagles, spaniels, and greyhounds. Mary, Queen of Scots with her Maltese 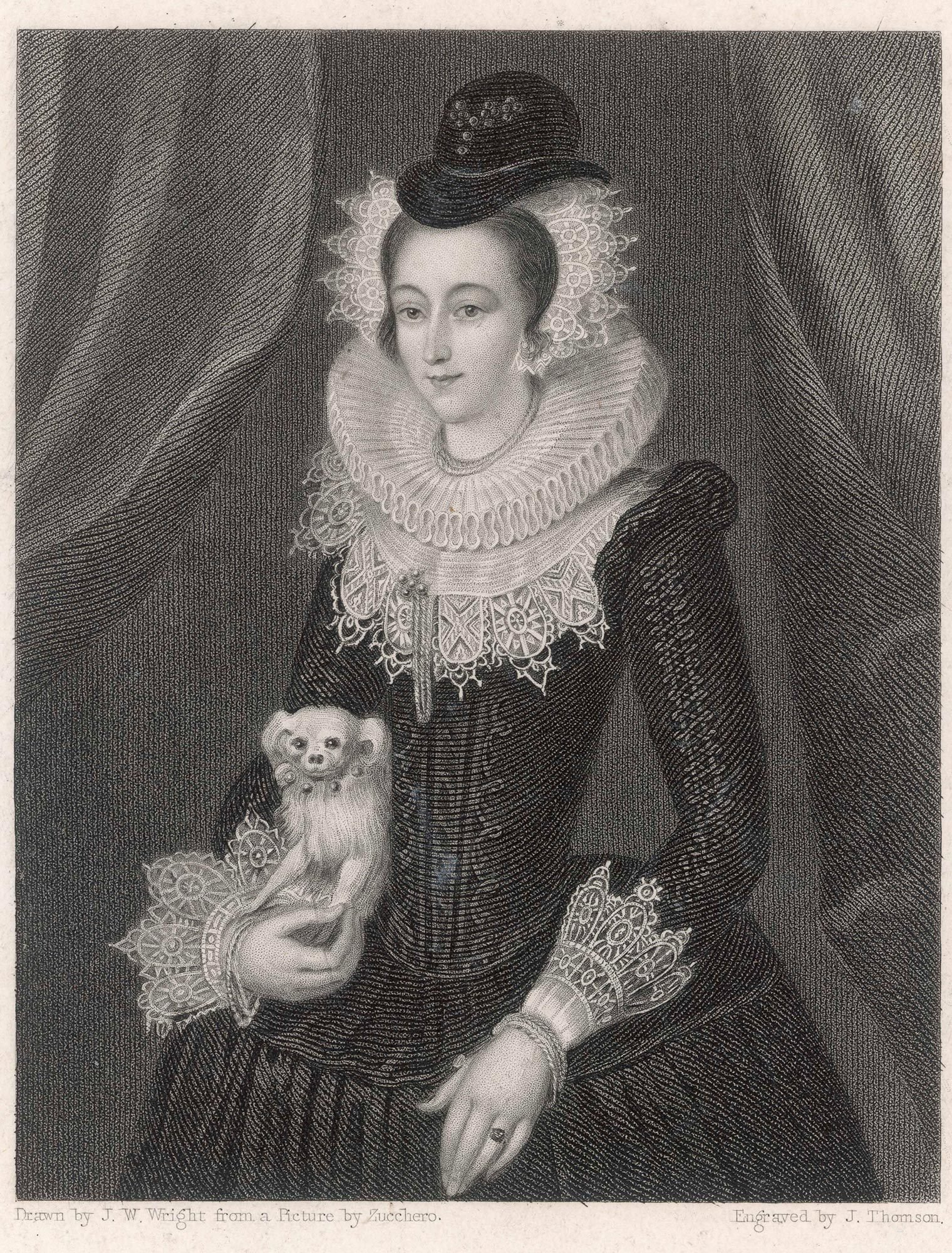 Mary, Queen of Scots led a turbulent life and her dogs, Maltese terriers, were one of her only comforts in the final 19 years of her life. During that time she was a prisoner of her cousin, Queen Elizabeth I (who allowed Mary to keep her dogs with her). It’s said at Mary’s execution, she concealed her beloved Maltese beneath her skirts, and no one even realized until after Mary’s death.

King Charles I, with the dog that bears his name 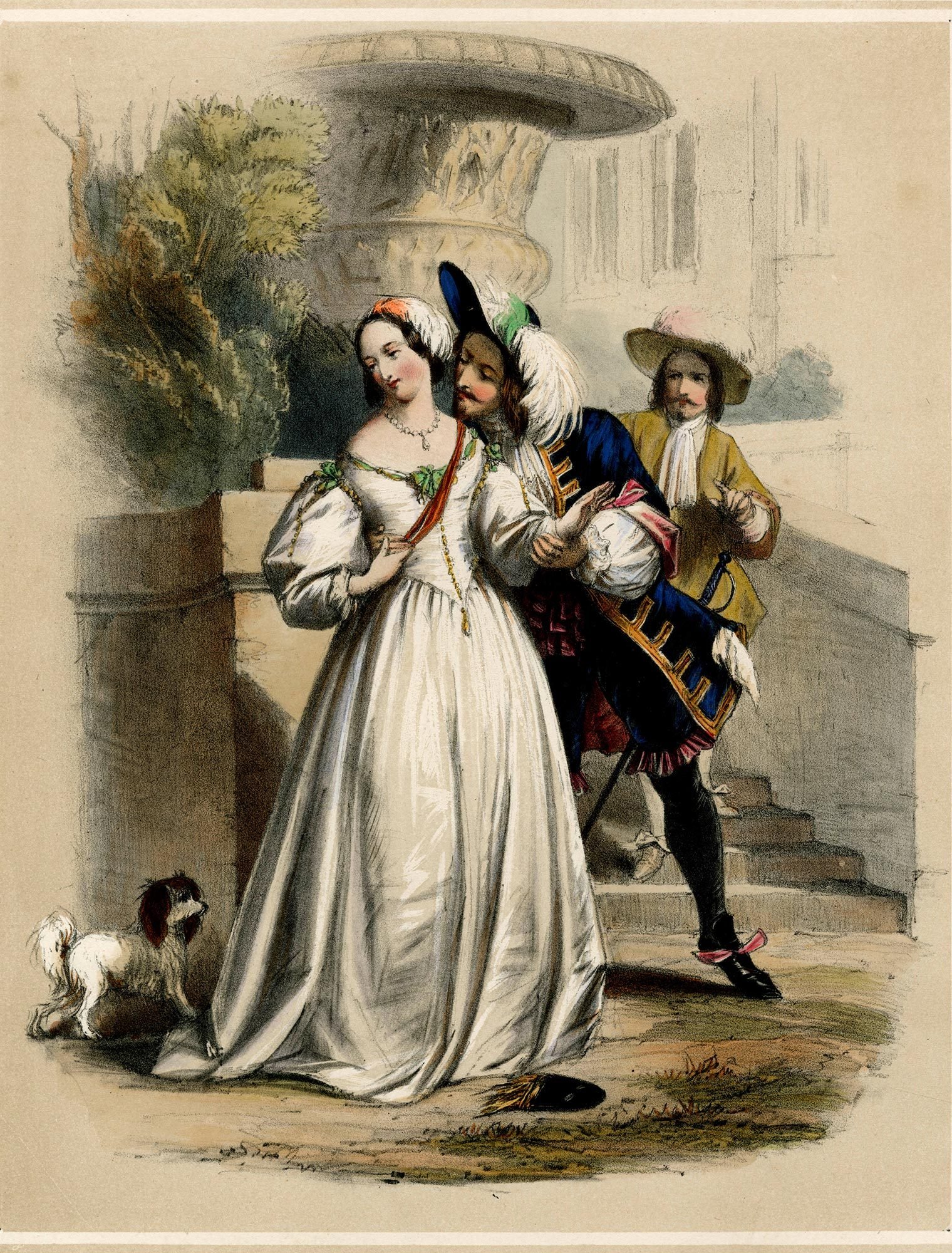 The second son of James VI grew up to become King Charles I, ascending to the throne in 1625. This painting of Charles flirting with a young woman features one of Charles’ beloved dogs, a spaniel that is now known as a King Charles Spaniel. The breed is very popular, despite that King Charles was an extremely unpopular king—his reign ended with his beheading in 1649. 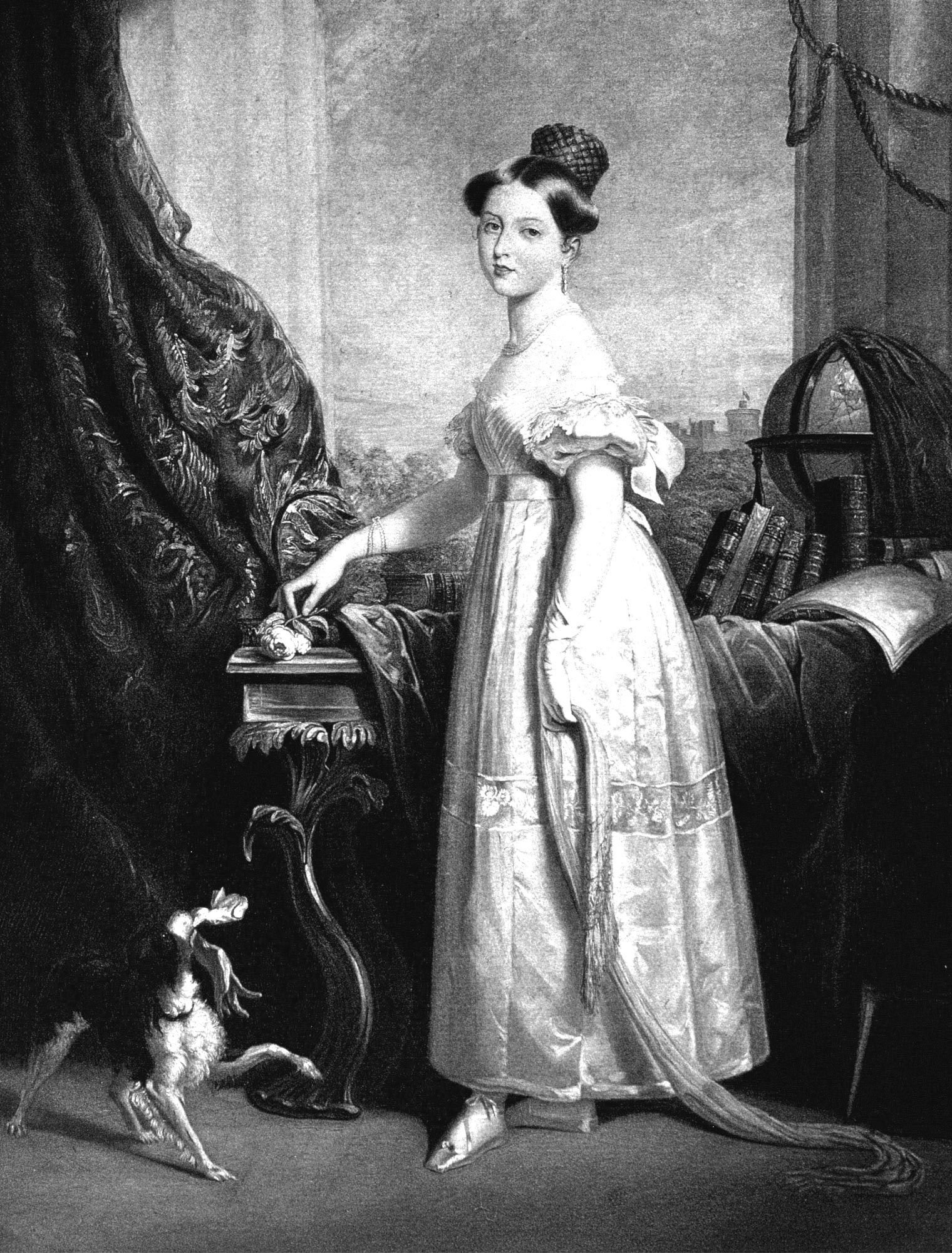 Queen Victoria’s beloved King Charles Spaniel, Dash, was given to her while she was still Princess Victoria. During a lonely childhood, Victoria relied upon Dash as one of her only friends. When Dash died in 1840, three years into Queen Victoria’s reign, she had the following engraved on his tombstone:

Here lies Dash, the favorite spaniel of Her Majesty Queen Victoria, by whose command this memorial was erected. He died on the 20th December 1840 in his ninth year. His attachment was without selfishness, his playfulness without malice, his fidelity without deceit. Reader, if you would live beloved and die regretted, profit by the example of Dash.

Queen Victoria went on to have many other beloved pets, but Dashy will always be remembered as her most beloved. 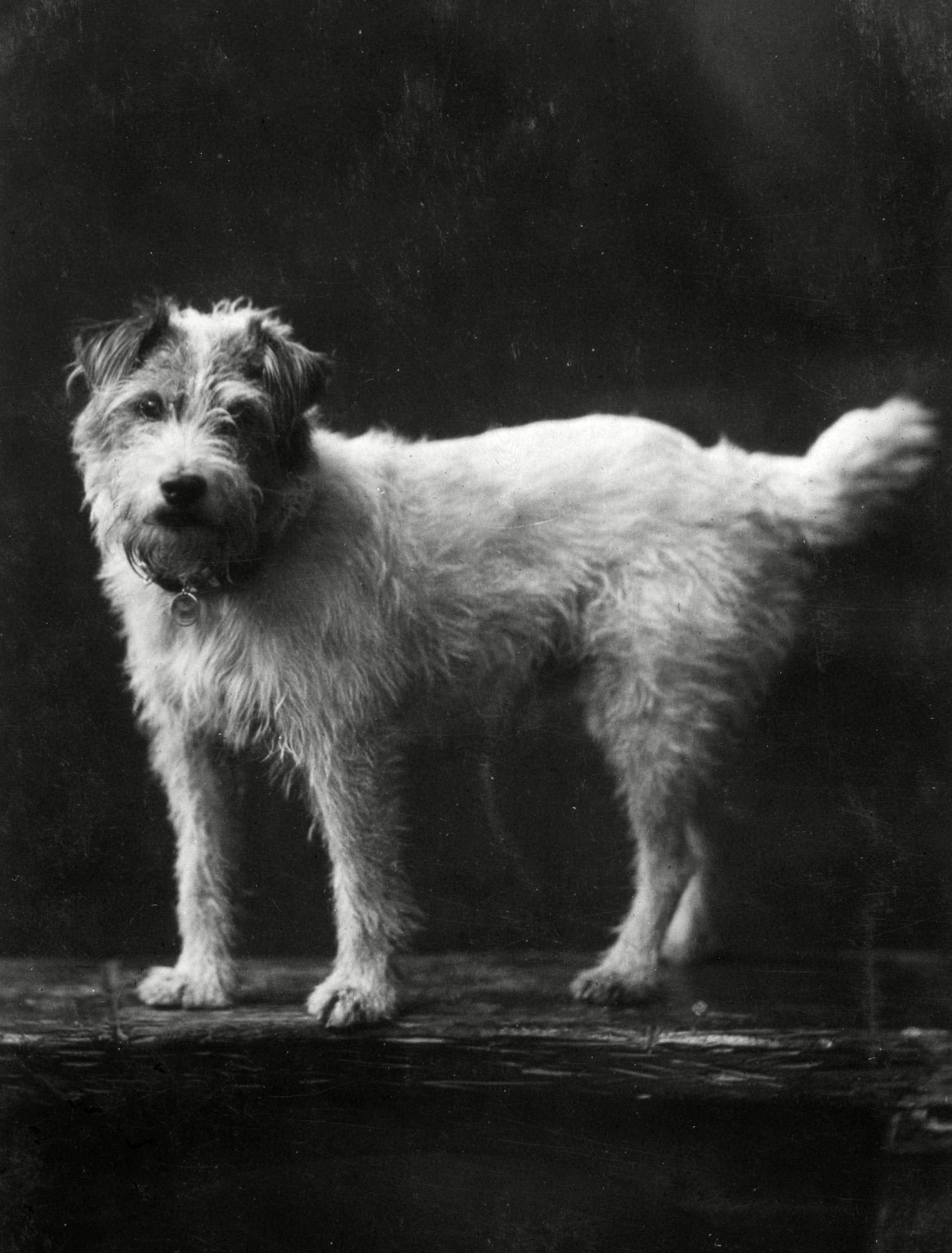 Although like his mum Queen Victoria, King Edward VII loved all dogs, his most famous was Caesar, a terrier, who accompanied the King everywhere, including meetings with politicians (who didn’t always appreciate “his royal stinkiness”). Caesar outlived his beloved master, even marching behind Edward’s coffin at the funeral procession in 1910.

Queen Consort Alexandra, and her Pekinese 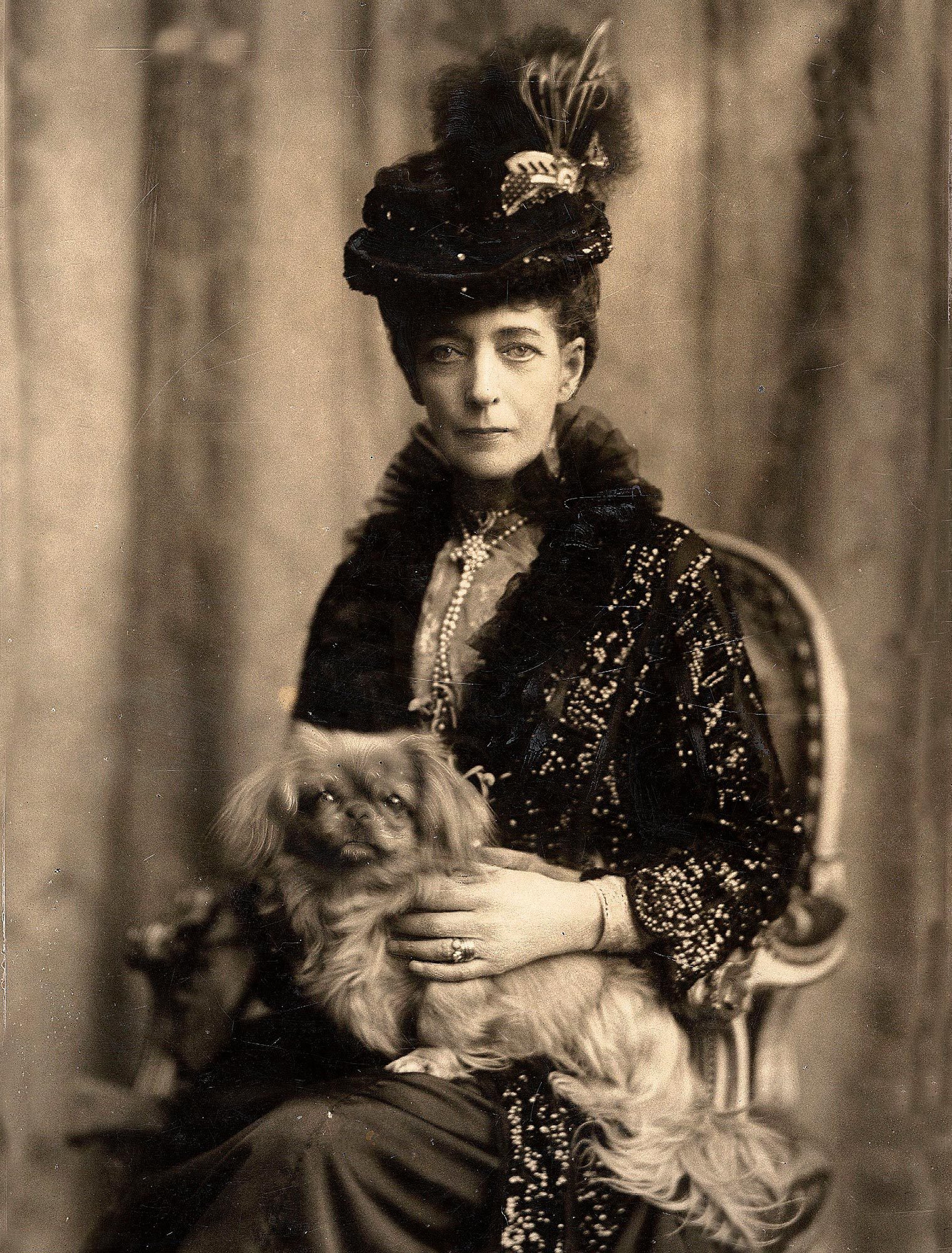 King Edward VII’s wife, the Queen Consort Alexandra, was no less a dog lover than her husband or her dear mother-in-law. She’s pictured here in the late 19th century with her Pekinese. Look a little different from the Pekinese you know today? 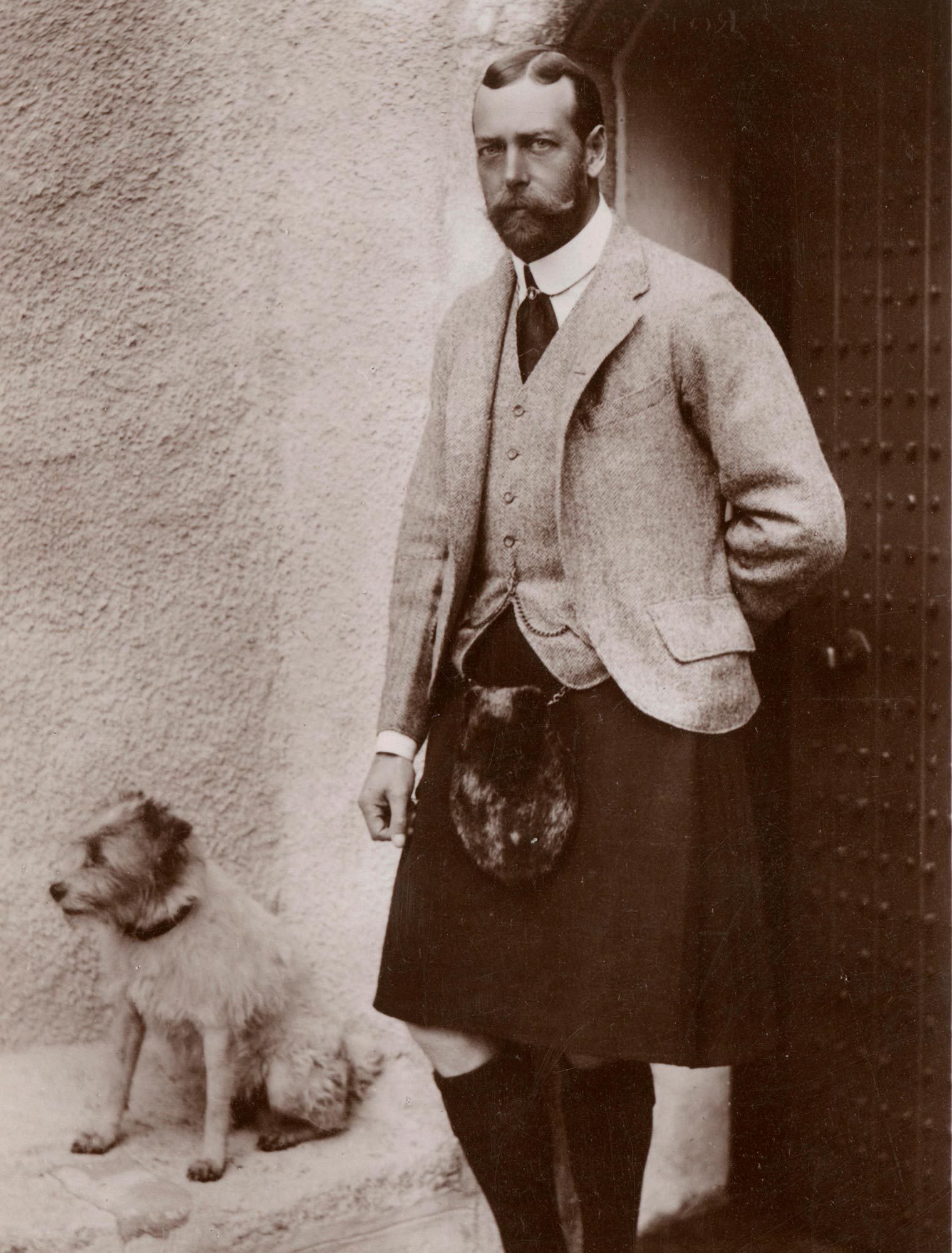 George, the Duke of Kent, with his Alsatian 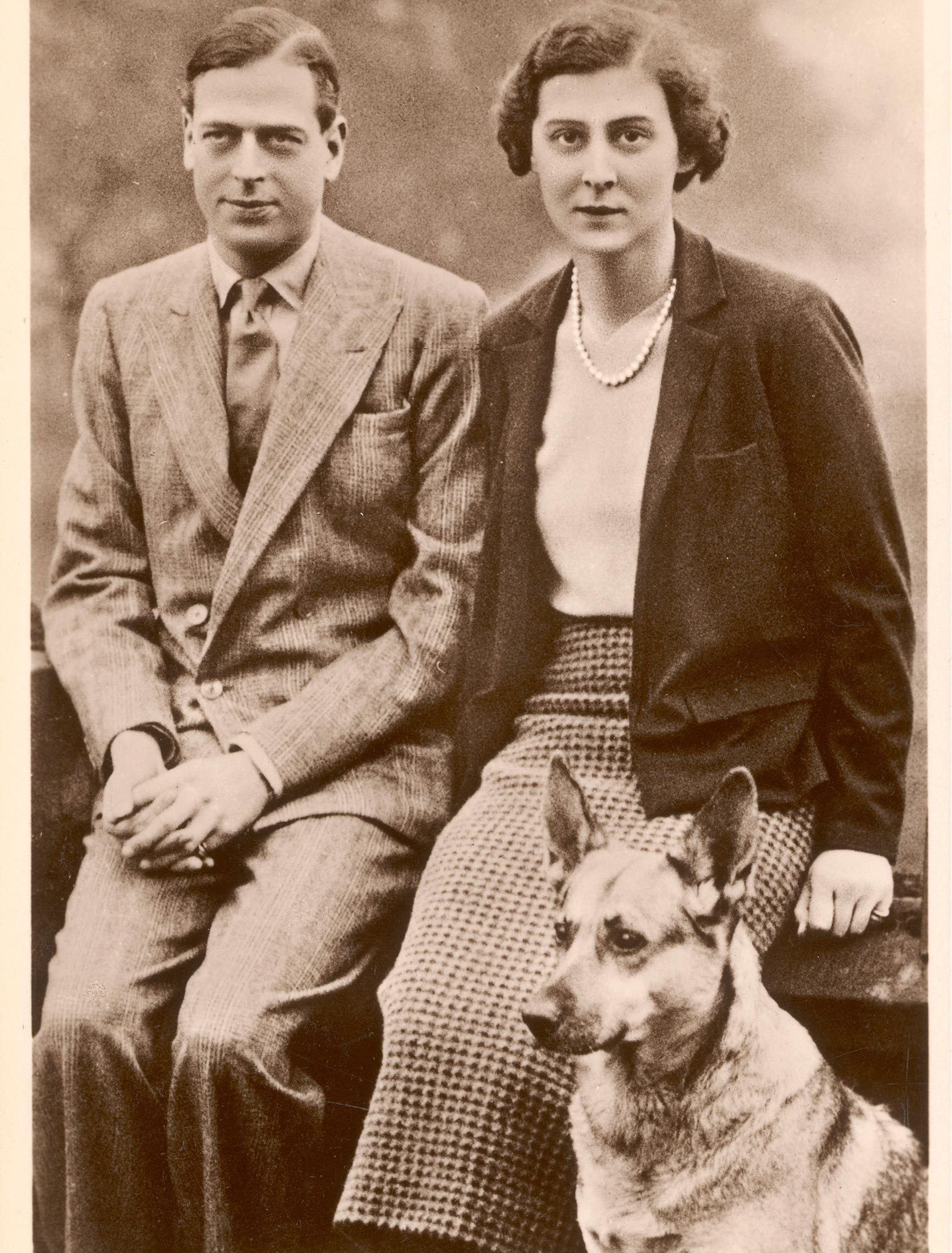 George, Duke of Kent, the second son of King George V, is pictured here with his wife, Princess Marina of Greece, and their beloved Alsatian. George died in a military plane crash in 1942, a decade before his niece, Princess Elizabeth would ascend the throne. 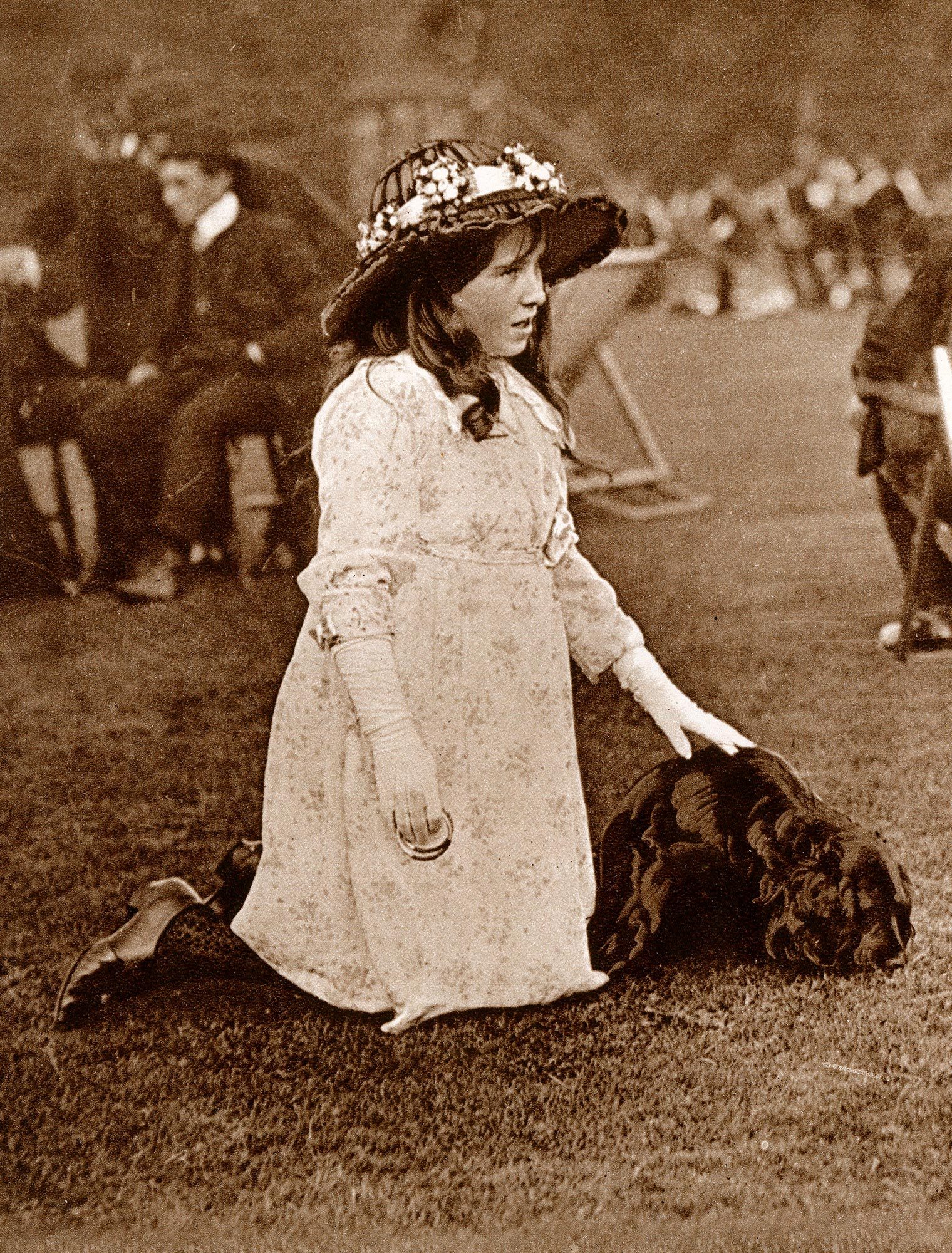 Lady Elizabeth Angela Marguerite Bowes-Lyon married King George VI and gave birth to Queen Elizabeth II and her sister, Princess Margaret (she became known as the Queen Mother when Elizabeth ascended the throne as Elizabeth II). Here she is pictured as a young girl with her dog at a garden party in Scotland.

Queen Elizabeth II as a child with Dookie, the first royal Corgi 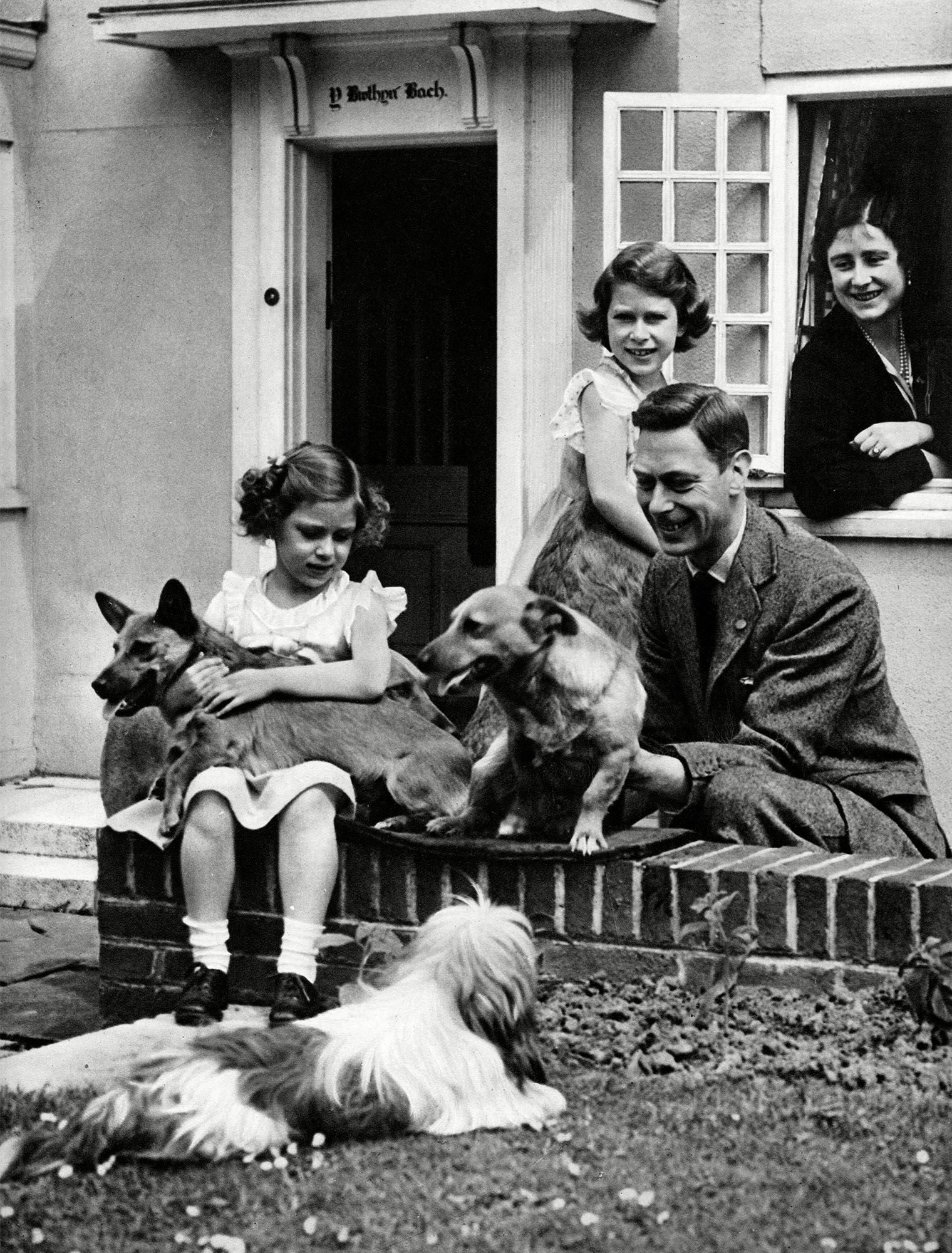 In this photo from 1933, George VI (at the time, still Albert, Duke of York) and the Queen Mum (at the time, still Elizabeth, Duchess of York) are pictured with their children, Princess Elizabeth (future Queen Elizabeth II) and Princess Margaret, and several of their dogs, one of whom is Dookie, the first Welsh Corgi owned by the royal family. Dookie, who was gifted to Elizabeth and Margaret by their dad, won the hearts of the princesses and sowed the seed for Queen Elizabeth become one of the world’s most famous fans, and breeders, of Corgis. The Duke and Duchess of Windsor, fans of pugs 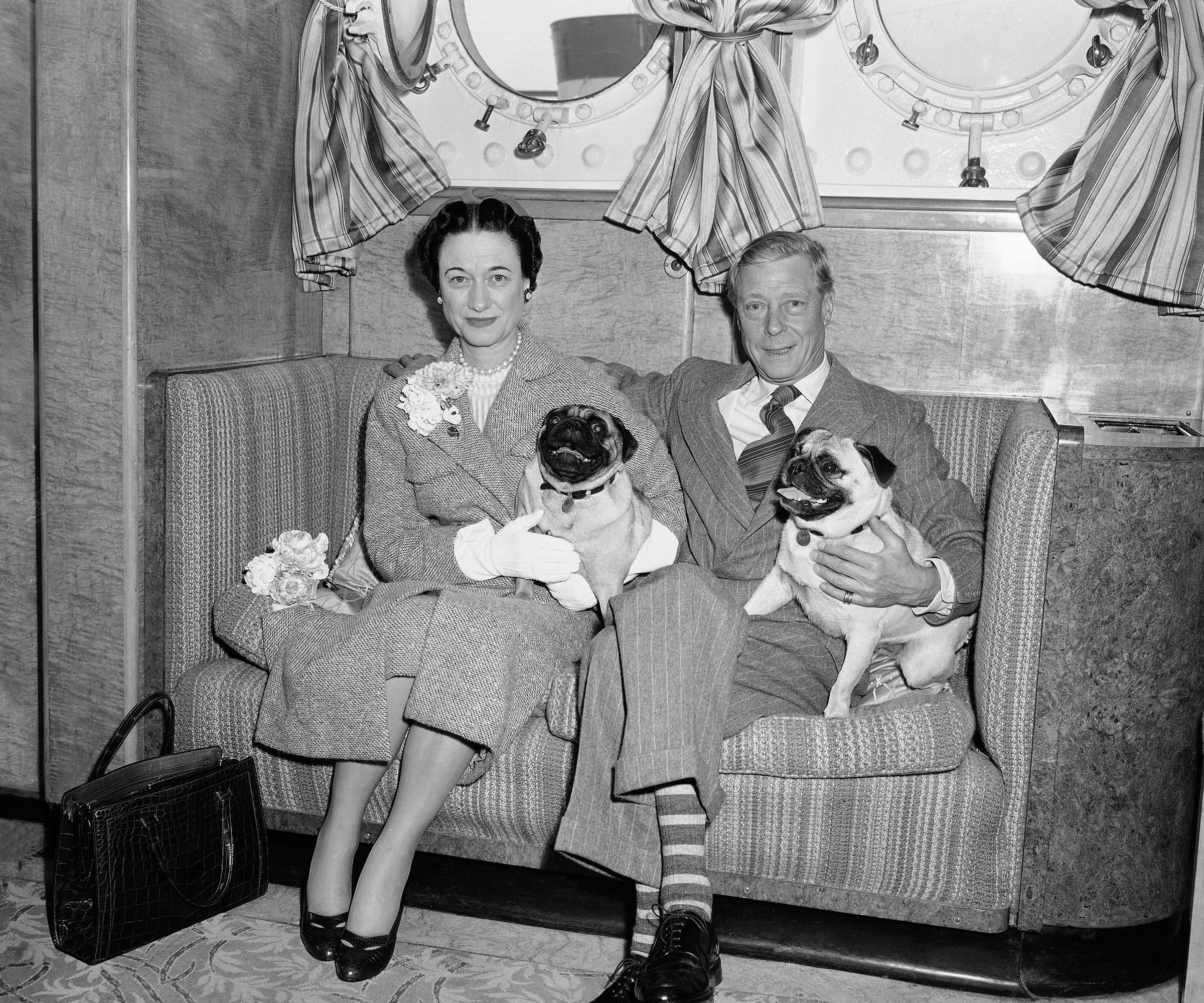 After King Edward VIII abdicated the throne, he became known as the Duke of Windsor. He and his wife, the former Wallis Simpson, Duchess of Windsor, adored all their dogs, but especially their pugs. Here they hold Trooper and Disraeli in 1954. 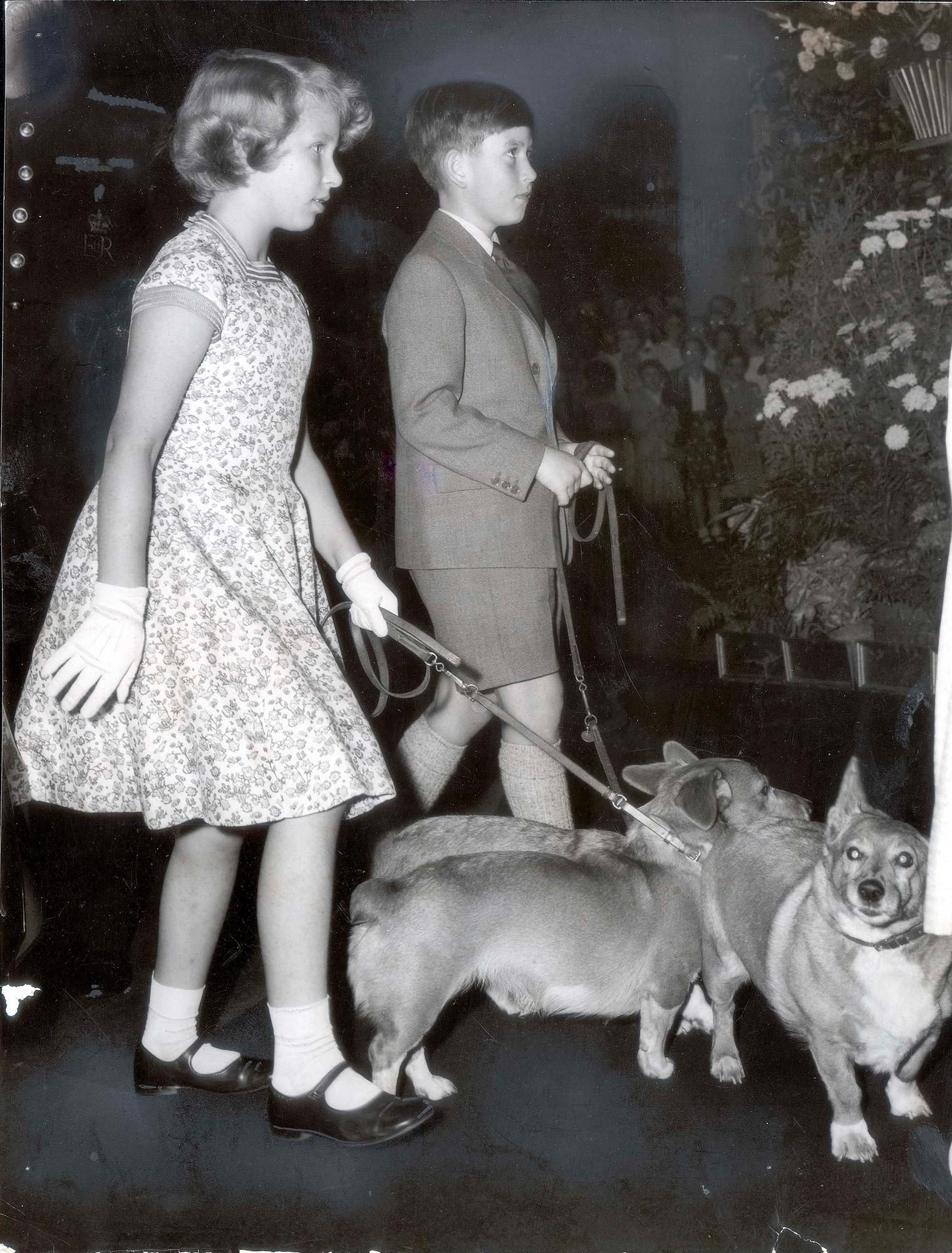 This photo, taken in 1959, shows Prince Charles and Princess Anne, the first two children of Queen Elizabeth II with her husband, Prince Philip, being led by three of the royal Corgis.

Princess Margaret with a couple of her pups 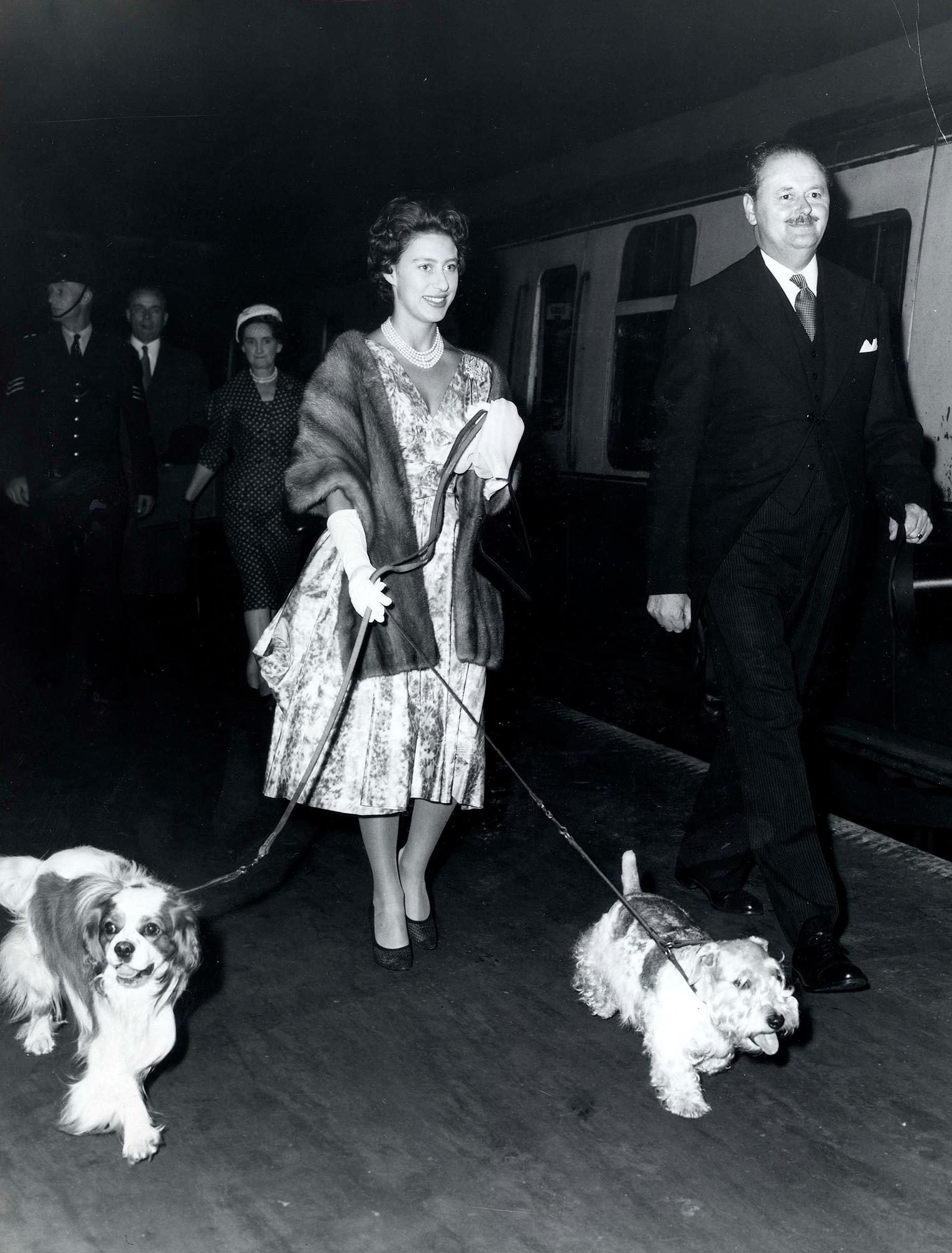 In this 1959 photo, Princess Margaret is walking along the platform at Kings Cross Station with two of her dogs (a terrier and a spaniel). A lady-in-waiting is following along with yet a third dog.

The whole family with a favorite Corgi 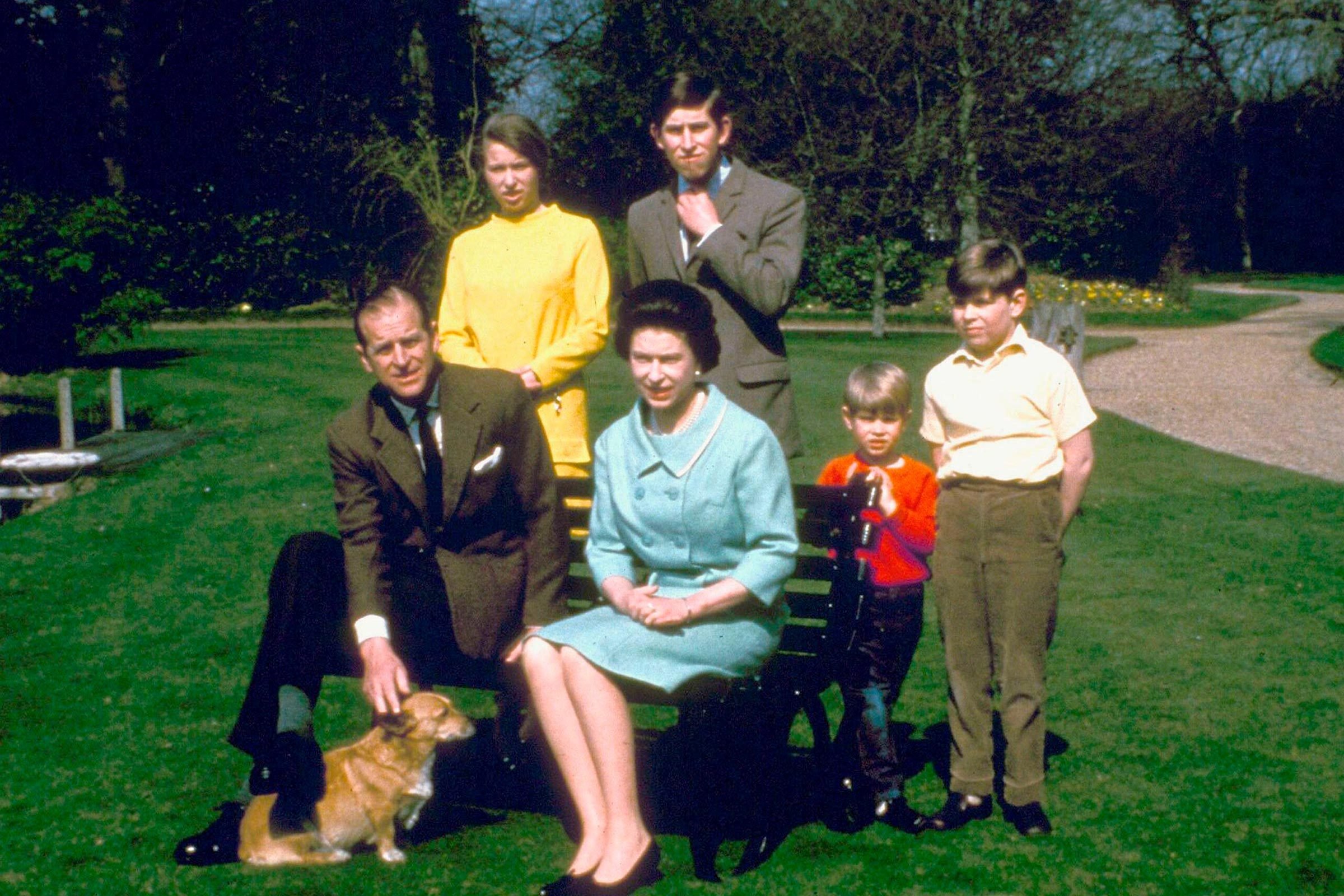 Princess Anne and her “Pleasure” 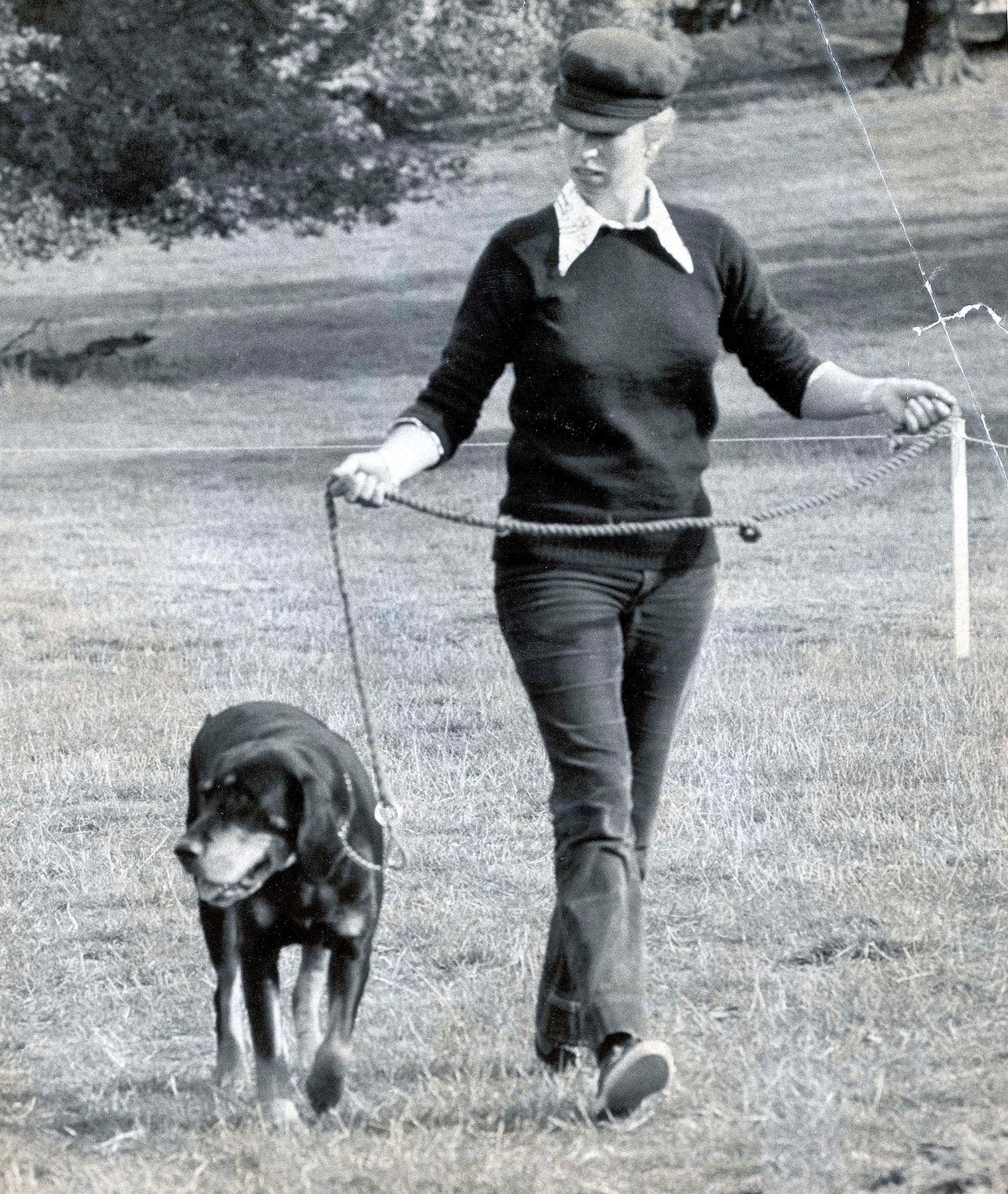 Princess Anne, who grew up to become Anne, Princess Royal, is not only a lover of dogs but a lover of horses. Here she’s seen in 1975 with her dog that she named “Pleasure.”

A royal beach outing with doggies 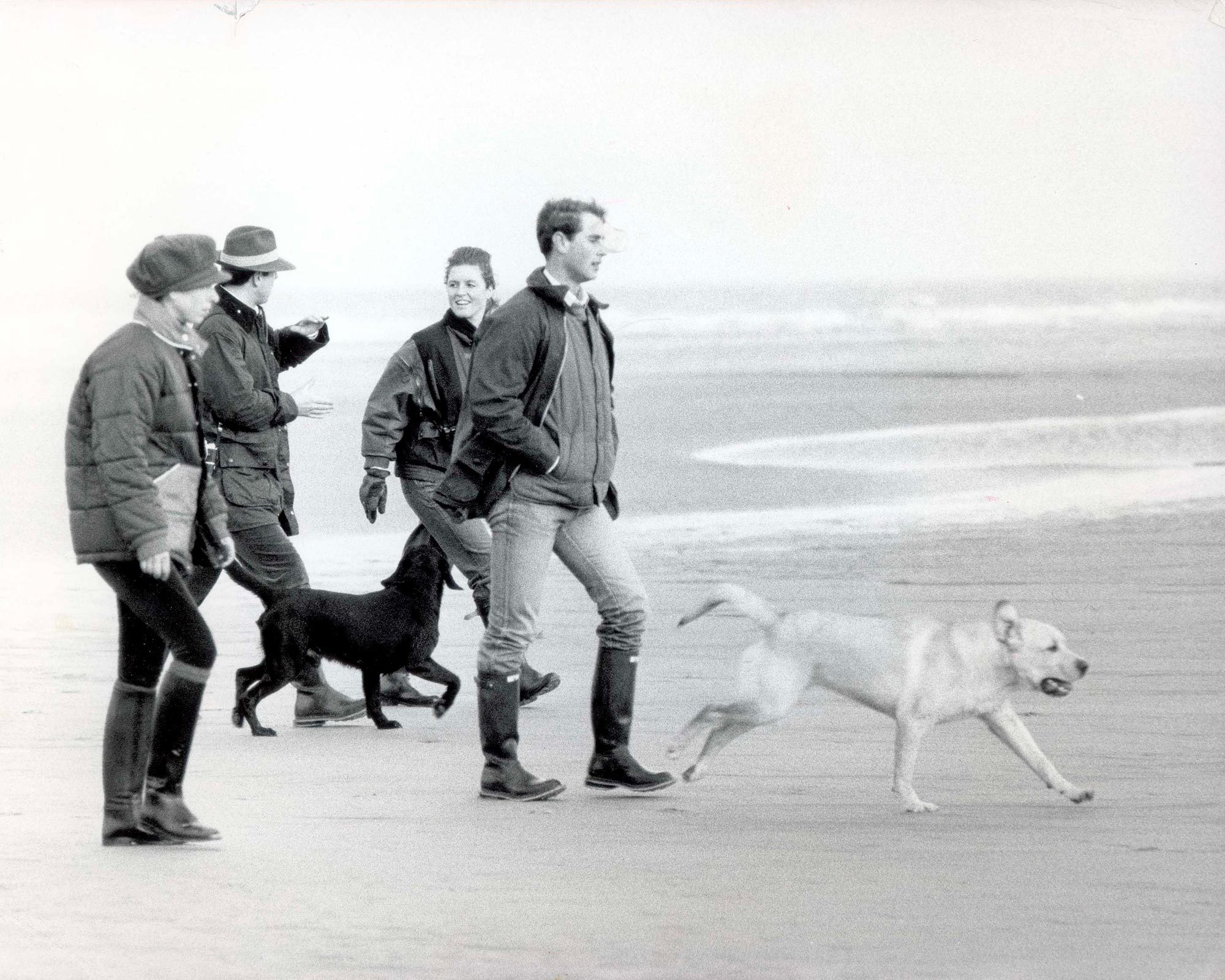 Diana, Princess of Wales, Prince Harry, and a pup 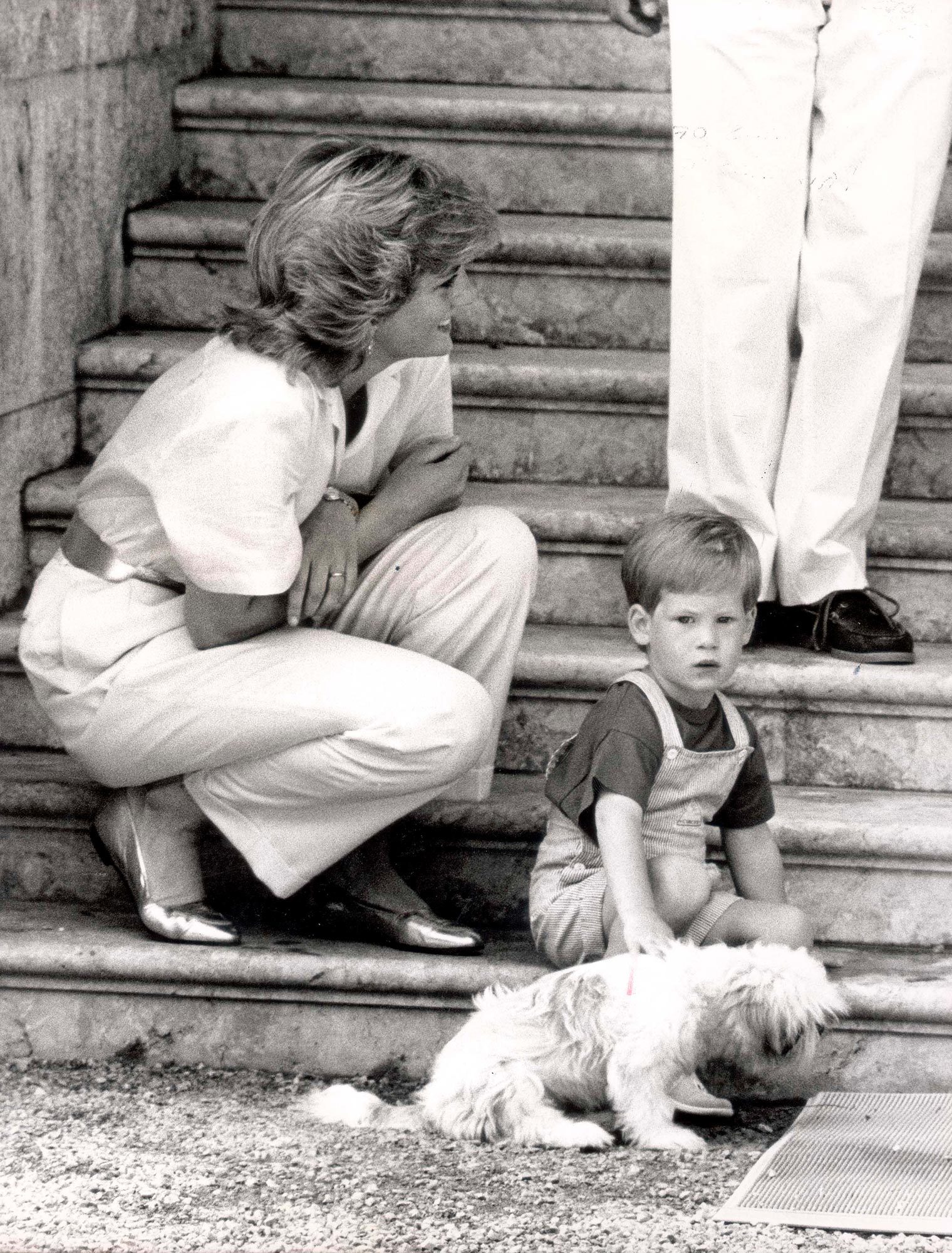 When Harry was just a wee lad, he took a brief pause from his holiday in Majorca, Spain for this photo with a small dog he was playing with on a set of stone steps, his mum, Diana, Princess of Wales beside him. The year was 1987, and the Wales family was visiting the Spanish Royal Family, which also has a famous fondness for four-legged friends. 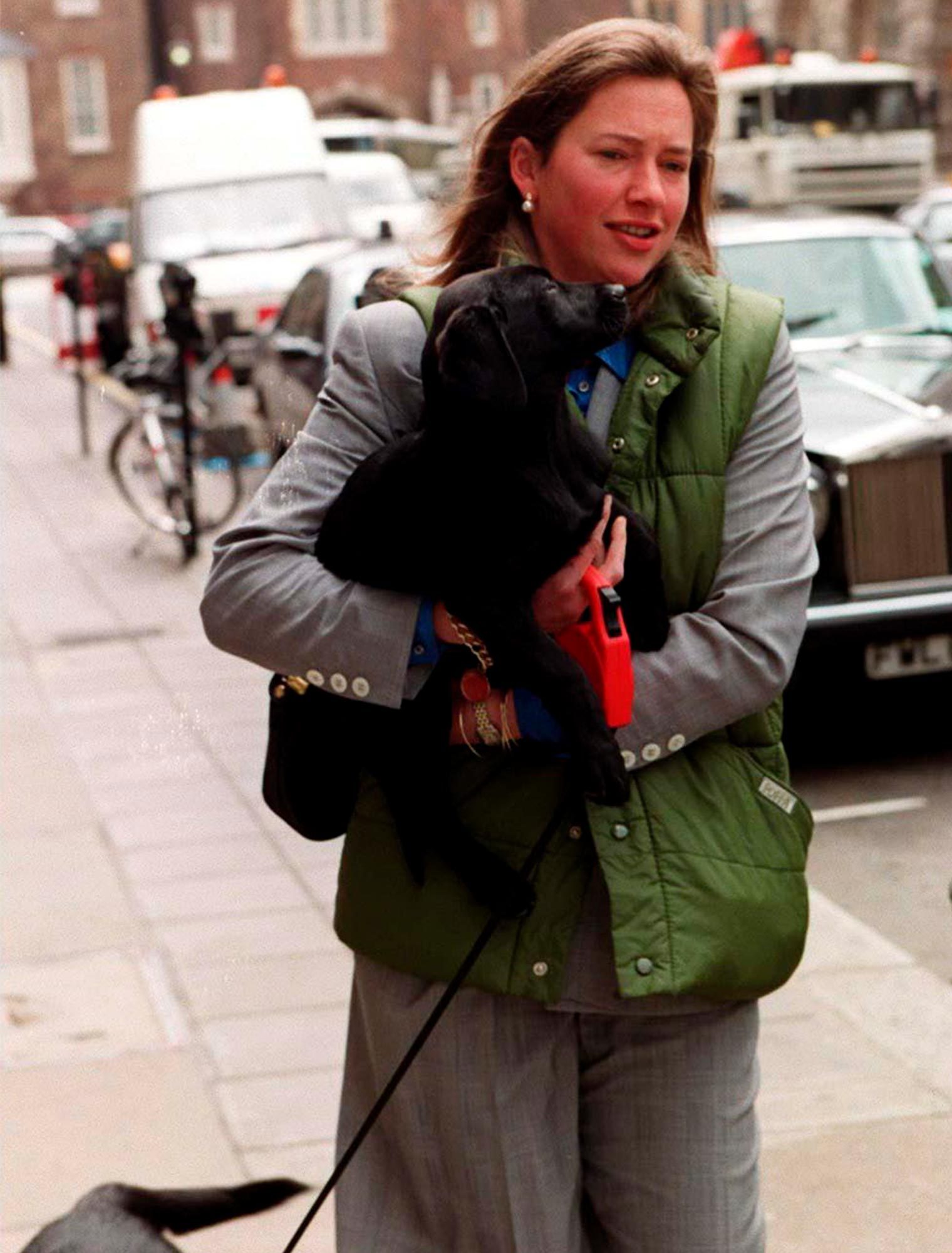 Queen Elizabeth II and her “Dorgi” 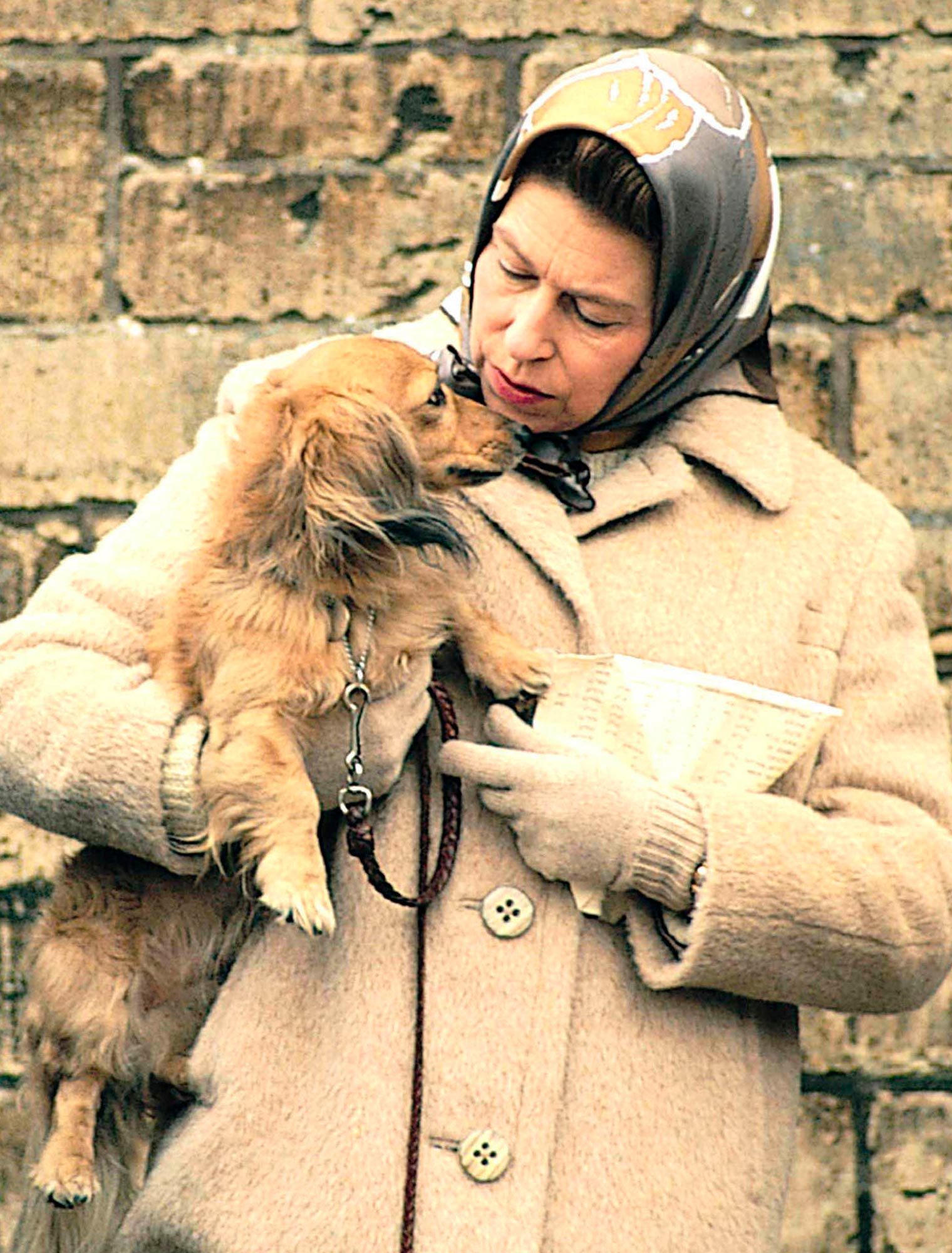 Think Queen Elizabeth II is all about the Corgis? Here she’s pictured in 2009 with a beloved “Dorgi,” a cross between a Dachshund and a Corgi. Queen Victoria and Prince Albert were also fans of dachshunds, which surged in popularity in the 1840s thanks to the wiener-dog-loving royals.

Camilla and her Jack Russell 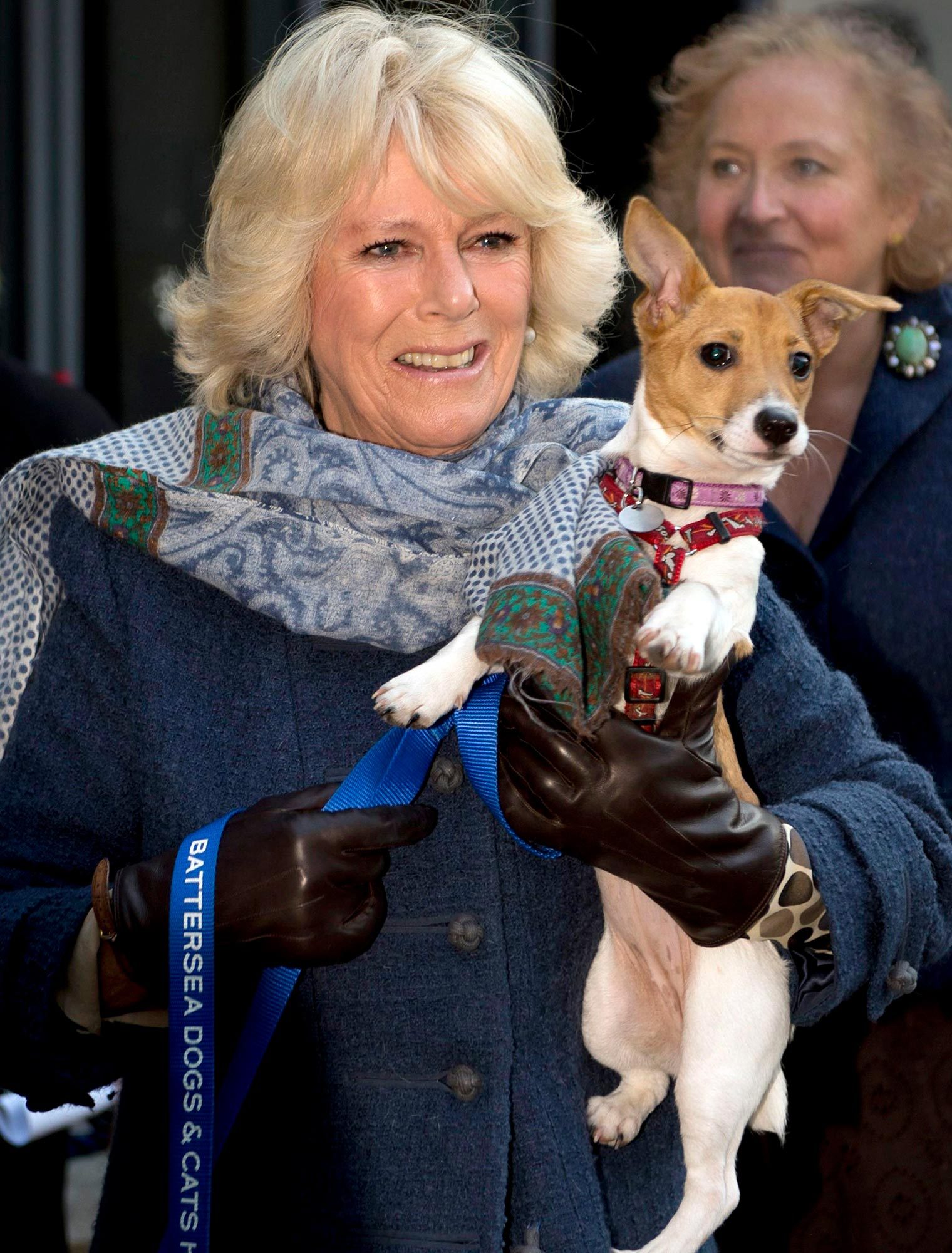 Like her husband Prince Charles and the rest of the royal family, Camilla, Duchess of Cornwall adores dogs. Here she’s pictured in December 2012 with her best pal, Bluebell, a Jack Russell Terrier.

Meghan Markle fits in perfectly with this family of dog lovers

Prince Harry and his new bride, Meghan, Duchess of Sussex, have recently adopted a rescue dog, a Labrador retriever who they’ve named “Oz.” But long before that, Meghan had a darling dog of her own, a Beagle called “Guy,” whom she brought to London with her from Canada. While we wait to see photos of Harry and Meghan’s growing dog brood, we shall have to content ourselves with this photo of the couple playing with two dogs belonging to Michael D. Higgins, president of Ireland, while on a visit to the country this past summer.