by Jeff Berardelli:  The United Nations’ weather and climate agency is out with its annual State of the Climate report, and it says “the tell-tale physical signs of climate change” are everywhere… The report documents unprecedented heat waves, fires and floods over the past year, and warns that there is likely more to come.

In the report, the UN’s World Meteorological Organization (WMO) cited the historic fires in Australia and the Amazon, record-shattering heat waves in Europe, and soaring levels of carbon dioxide in the atmosphere. In a statement released with the report, the leader of the United Nations calls climate change “the defining challenge of our time” and said “time is fast running out for us to avert the worst impacts of climate disruption.”

“We are currently way off track to meeting either the 1.5°C or 2°C targets that the Paris Agreement calls for,” said UN Secretary-General Antonio Guterres, referring to the goal of limiting the rise in global temperatures to no more than 1.5 or 2 degrees Celsius above the pre-industrial average. “This report outlines the latest science and illustrates the urgency for far-reaching climate action.”

In order to reach those targets the world would have to rein in our dependence on burning fossil fuels, which release heat-trapping greenhouse gases. However, carbon dioxide (CO2) levels once again hit a record in 2019 — nearly 40% higher now than before the Industrial Revolution and the highest levels in 3 million years.

More than 90% of the heat from these excess greenhouse gases is trapped in the oceans, and that has resulted in another record-breaking year for ocean heat content. Even though there was no El Nino, a climate pattern which allows ocean heat to escape into the atmosphere, 2019 still ended up being the globe’s second-warmest year on record. In fact, the five warmest years on record worldwide occurred over the most recent five years.

The impact on humans is growing, with climate variability and extreme weather “among the key drivers of the recent rise in global hunger,” the UN said in a press statement.

The report also highlighted the most consequential climate-change-driven events over the past year.

If there’s one thing most of the planet will remember about 2019, it’s the out-of-control fires. From Australia to the Amazon to California, devastating fires dominated news headlines for weeks.

As shown in the recent CBSN Originals documentary “Complicit: The Amazon Fires,” slash-and-burn techniques for deforestation are rapidly fracturing the vital rainforest. Scientists warn it may be only a few years before the ecosystem reaches a tipping point and transitions into a more open savanna, with vastly less ability to absorb greenhouse gases and buffer the Earth against climate change.

In Australia’s worst fire season on record, 46 million acres were burned, more than 1 billion animals died and the estimated price tag is in the tens of billions of dollars. A international study recently concluded that the Australian bushfires were made much more likely and more intense due to human-caused climate change.

The same mechanism that set the stage for the historic bushfire season in Australia also supercharged the heat wave which helped fuel those fires. A phenomenon called the Indian Ocean Dipole, with cool waters near Australia and warm waters near east Africa, combined with a climate system spiked by human heating to cause a record-shattering heat wave in Australia.

The WMO report notes that Australia experienced the entire country’s hottest day on record at 107 degrees Fahrenheit in December, with 2019 featuring the 7 hottest days on record for the nation.

Not even Antarctica was spared from record breaking heat, with temperatures of 69 and 65 degrees Fahrenheit reported on two separate days in February. The unusual warmth is rapidly melting ice and fracturing ice shelves.

As mentioned above, ocean heat content (the amount of heat stored in the ocean) set a new record in 2019. While ocean waters help absorb heat and buffer the atmosphere from a rapidly warming climate, that heating takes its toll on the oceans. The report notes that 84% of oceans experienced a marine heat wave in 2019. 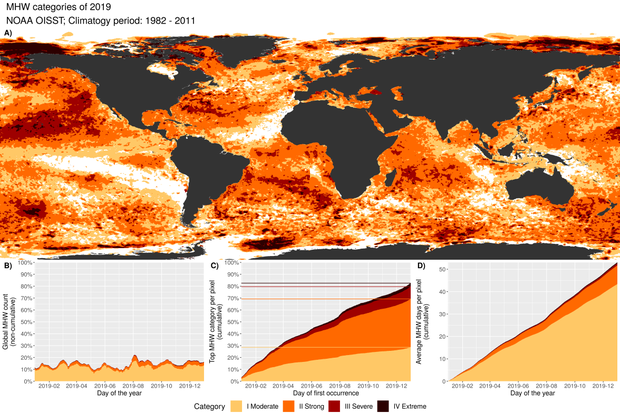 During this past summer a huge ocean heat blob extended from Alaska to California to Hawaii, making for sweltering summer heat in Hawaii with hundreds of record hot temperatures set.

Currently, ocean heat is building up over Australia’s Great Barrier Reef, where NOAA Reef Watch predicts that a mass bleaching event, perhaps the most widespread ever, is now underway. The WMO report says that the world’s coral reefs are projected to decline to as low as 10% of their former cover when the Earth reaches 1.5° Celsius of global warming, and to less than 1% of their former extent at 2° Celsius of warming.

So far the Earth’s atmosphere has warmed by 1.1° Celsius since pre-industrial times. We will likely reach 1.5° of warming in just the next couple of decades. 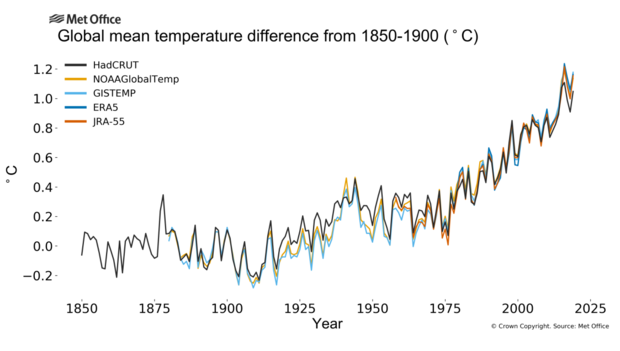 While Australia was searing in heat, drought and fire, the other side of the Indian Ocean was suffering from the opposite: torrential rains and flooding in east Africa. Also related to the extreme Indian Ocean Dipole, enhanced by a warmer climate, the unusually heavy rain in late 2019 contributed to the worst desert locust outbreak in the Horn of Africa region in 25 years and the most serious in 70 years for Kenya. This locust outbreak is expected to spread further through June, destroying crops and posing a severe threat to food security.

As the climate continues to warm, the atmosphere can hold more moisture. This results in more extreme rain events — and the United States has not been spared. 2019 was one of the wettest years on record for the U.S. with historic floods plaguing the middle of the nation for months last spring. Total economic losses from flooding in the United States in 2019 were estimated at $20 billion.

There were 105 named tropical systems worldwide in 2019. The strongest storms of the year were Typhoon Halong in the western Pacific with winds of 190 mph and the now infamous Hurricane Dorian, which struck the Bahamas with winds of 185 mph.

Recent research shows that the extra heat being stored by the oceans is  powering stronger tropical cyclones with heavier rainfalls. That trend is expected to continue in the coming decades.

As a direct result of cyclones, especially a select few major disasters, the WMO report says 6.7 million people were displaced just between January and June of 2019.
For the full year, the number was forecast to reach close to 22 million, up from 17.2 million in 2018.

The biggest impact events were Cyclone Idai in Southeast Africa, Cyclone Fani in South Asia and Hurricane Dorian in the Bahamas. CBS News’ “60 Minutes” recently revisited the hard-hit Abaco Islands in the Bahamas to see how residents are recovering.

Climate scientists are in clear consensus that the devastating climate events of 2019 are in part driven by human-caused climate change, and they say such disasters will only get worse until humanity manages to decarbonize our economies and reduce excess greenhouse gases in the atmosphere. This climate challenge is herculean, but one that is necessary to preserve Earth’s fragile life systems.