Marilyn & Ella: The “Truth” Behind Ella’s Booking At The Mocambo

by Clarissa Saunders: Prior to my visit to the 2016 Marilyn Monroe exhibition in my old home town Amsterdam (The Netherlands)… I had never heard of the connection between Marilyn and jazz singer Ella Fitzgerald. It was through the exhibit that I discovered that Marilyn was responsible for Ella’s booking at the Mocambo, in the 1950s thé jazz hot spot in Los Angeles frequented by many Hollywood stars. Legend has it that the Mocambo had refused to book Ella because of her skin colour and Marilyn, a huge Ella fan, then called the owner of the club demanding Ella’s booking. In exchange, Marilyn would sit at the front table during every performance. The affair attracted much publicity and it is said the two women became friends after that.

The source of the Mocambo story was Ella Fitzgerald herself. In an August 1972 interview with Ms. Magazine she had said: “I owe Marilyn Monroe a real debt … she personally called the owner of the Mocambo, and told him she wanted me booked immediately, and if he would do it, she would take a front table every night. She told him – and it was true, due to Marilyn’s superstar status – that the press would go wild. The owner said yes, and Marilyn was there, front table, every night. The press went overboard. After that, I never had to play a small jazz club again. She was an unusual woman – a little ahead of her times. And she didn’t know it.”

While I love the story of Ella being the first black artist to perform at the Mocambo thanks to Marilyn’s interference and Marilyn being there front and center every night, the story has been disputed, in particular by the website Marilyn: A Day In The Life with this interesting article. Apparently, Ella was not the first black performer at the Mocambo, other black artists had performed at the club before her including Dorothy Dandridge in 1952 and Eartha Kitt in 1953. The reason why club manager Charlie Morrison didn’t want to book Ella was not because of her race but probably because he didn’t think her glamorous enough. As to Marilyn being present at the Mocambo every night during Ella’s run (15-25 March 1955), April VeVea of Marilyn: A Day In The Life argues that Marilyn couldn’t have been there since she was not in Los Angeles at the time. However, Marilyn did make several appearances at the Tiffany Club, another Hollywood jazz venue, in November 1954 while Ella was performing there. The famous pictures of the two women together at a Hollywood nightclub were taken at the Tiffany Club and not at the Mocambo. And so, argues VeVea, in her 1972 interview Ella must have confused Marilyn’s actual appearances at the Tiffany Club with appearances at the Mocambo.

With both the race story and Marilyn’s presence at the Mocambo disputed, did Marilyn still play a role in Ella’s booking at the Mocambo or not? According to a newspaper clipping (see image) and Marilyn biographer Michelle Morgan (here), Marilyn did. However, VeVea of Marilyn: A Day In The Life says Marilyn didn’t and her point of view seems confirmed by a memo written by Marilyn’s secretary Inez Melson. Melson wrote the memo as a reminder of the conversation she had with Jo Brooks, wife of Jules Fox who was Ella’s publicity agent. It confirms that Marilyn had visited the Tiffany Club late 1954 when Ella was playing there. Judging from the memo, however, it looks like Marilyn had nothing to do with the Mocambo booking and merely wanted to give a party for Ella after Ella had been booked. Ultimately, Marilyn never hosted the party as she was out of town then. 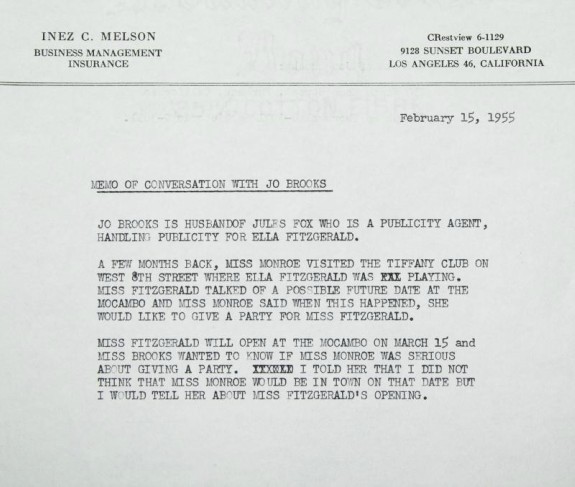 Memo of conversation with Jo Brooks

Jo Brooks is husband of Jules Fox who is a publicity agent, handling publicity for Ella Fitzgerald.

Miss Fitzgerald will open at the Mocambo on March 15 and Miss Brooks wanted to know if Miss Monroe was serious about giving a party. I told her that I did not think that Miss Monroe would be in town on that date but I would tell her about Miss Fitzgerald’s opening.