Where Do Birds Go In A Hurricane?

by GrrlScientist: When severe weather hits, humans flee or hunker down and hope for the best. But what about birds? Where do they go? And what happens to migratory birds?

Hurricane Irma, the most powerful storm ever recorded in the Atlantic Ocean, heads toward the Eastern Caribbean in this photograph, captured by a satellite on Tuesday, Sept. 5, 2017.
(Credit: NOAA / public domain.)

As the southern United States faces a second record-breaking hurricane in less than two weeks, I’ve been asked many times: “What happens to birds in hurricanes? Where do they go?”

Basically, birds have a variety of strategies for dealing with large storms, such as hurricanes, including: leaving the area; flying ahead of, or into the storm; or sheltering in place.

Birds may leave in advance of an approaching storm

Research has shown that birds can hear infrasound (ref) and are sensitive to barometric pressure (ref and ref), so they know when a storm is on its way — especially when the storm is as large and as powerful as a hurricane. When a large storm approaches, birds in its path may adjust their behaviors within the parameters of their own life histories and according to season. For example, white-throated sparrows, Zonotrichia albicollis, are migratory songbirds, so if a large storm is approaching during their annual spring or autumnal migration period, they may migrate sooner than they might otherwise do (ref). Interestingly, research has found that sparrows speed up their autumnal migratory departure date in response to falling barometric pressures (but not temperature), whereas they delay their spring migratory departure in response to falling temperature (but not barometric pressure). 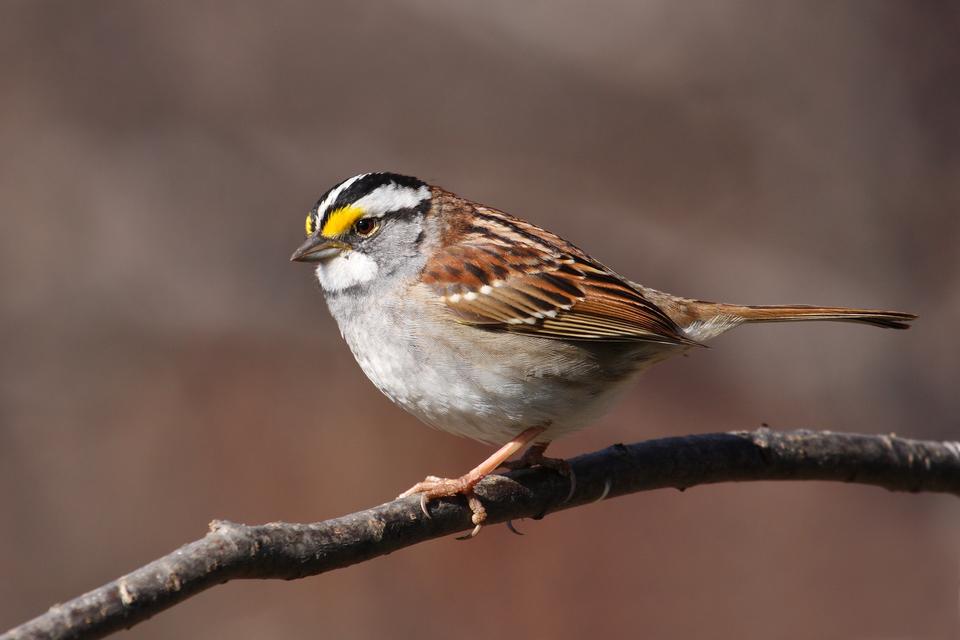 Cephas via a Creative Commons license

Birds may fly ahead of, into, or through, a storm

Some migratory birds may intentionally fly into a large storm. For example, a whimbrel, Numenius phaeopus, named Chinquapin, flew into Hurricane Irene’s dangerous northeast quadrant in 2011. This medium-sized shorebird was part of an ongoing research project and was carrying a satellite tracker, allowing scientists to watch this intrepid bird’s progress in real time as she migrated from Hudson Bay, Canada, to her wintering grounds in South America. 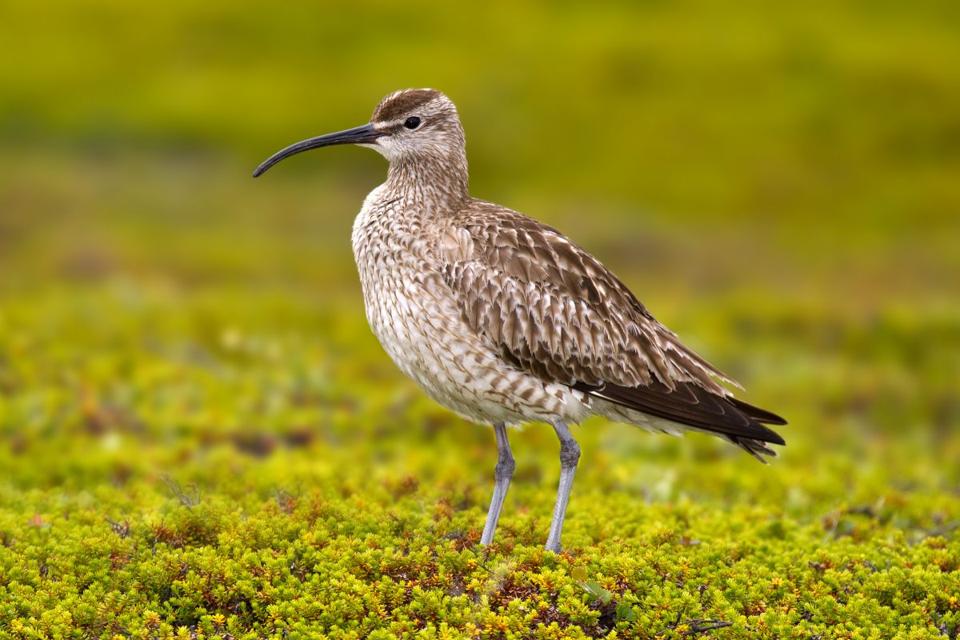 Whimbrel (Numenius phaeopus), is a wading shorebird. This migratory shorebird is one of the most widespread of the curlews, breeding across much of subarctic North America, Europe and Asia as far south as Scotland.
(Credit: Andreas Trepte / CC BY-SA 2.5.)

Chinquapin was lucky. Although this same bird successfully flew around the edge of Tropical Storm Colin in the previous year, a second satellite tagged bird flew into that storm and was killed.

But storms are not the worst of what whimbrels and other migratory birds encounter. Several other satellite tagged whimbrels, named Machi and Goshen, survived their flights through hurricanes in 2011. (Like Chinquapin, Goshen also tangled with Hurricane Irene, although she flew through the outer edge instead.) But both Machi and Goshen paused on the Caribbean island of Guadeloupe and tragically, both were shot dead within hours of their arrival. (This is a common fate for hurricane survivors landing on Guadeloupe.)

In the same year, another satellite tagged whimbrel, named Hope, flew into Tropical Storm Gert off the coast of Nova Scotia, Canada. Incredibly, she endured strong headwinds for 27 hours straight, and was able to fly at an average speed of only 7 miles per hour (11kph). In contrast, after she successfully emerged from the middle of that storm, she then was pushed by strong tailwinds at an average speed of 90 miles per hour (145kph) and safely returned to her staging grounds on Cape Cod — after expending a huge amount of effort for no gain. 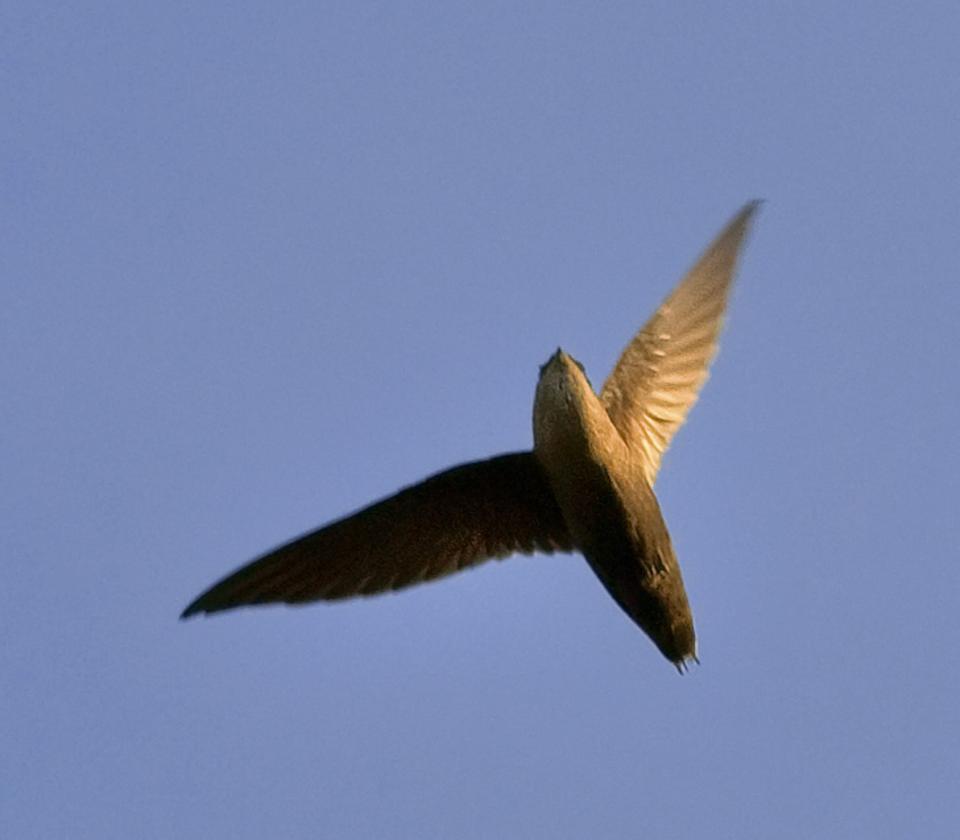 A chimney swift (Chaetura pelagica) flying in Austin, Texas, USA. This migratory species is famous because a flock was “kidnapped” by Hurricane Wilma in 2005 and relocated to Western Europe.
(Credit: Jim McCulloch / CC BY 2.0.)

But migrating ahead of, or during, a hurricane is a strategy that is fraught with dangers and can have unexpected consequences, especially for small birds. For example, in 2005, a large flock of migrating chimney swifts, Chaetura pelagica, was swept up by Hurricane Wilma, and the lucky survivors relocated to Western Europe — to the delight of bird watchers there.

Other small migratory bird species may become trapped inside a hurricane, as probably was the situation for those migrating chimney swifts. For example, radar images of Hurricane Matthew as it raged across Florida in 2016 showed it had a huge flock of birds trapped in its eye.

These birds were relocated by many hundreds or thousands of kilometers away from where they were, or wanted to be — again, to the delight of local birders.

Birds may shelter in place and hang on for dear life

Many non-migratory birds seek shelter inside thick bushes or on the leeward side of trees. Trees and shrubs can dramatically reduce wind speeds and can keep birds dry even during a torrential downpour. And since birds adapted to sleeping whilst perched, their feet automatically close when they are relaxed, thereby making it easier for birds to hang on to something solid for dear life.

Birds may also find cover where ever it exists. For example, an injured Cooper’s hawk, Accipiter cooperii, now known as Harvey, took refuge in Willam Bruso’s taxi in Houston during Hurricane Harvey just a few days ago:

Harvey (the bird, not the hurricane) was given to the TWRC Wildlife Center the following day, where it was discovered that she had suffered a broken wing (and was probably in shock from the pain and from fear), thereby preventing the terrified bird from flying. Harvey is expected to make a full recovery.

In addition to taxis, other birds, such as woodpeckers and parrots, may seek shelter in their nest-holes or in other cavities. This works well unless the tree they are sheltering in is uprooted or snapped off at the cavity (typically a tree’s weakest point), or if these birds become trapped by floodwaters — just as people become trapped in their attics and drown.

Remember that flock of chimney swifts that I mentioned? Most of them met a horrible end: at least 727 of these tiny birds’ bodies were found later (ref) — but how many thousands more died and were never found? Indeed, Hurricane Wilma’s effects on chimney swift numbers were so severe and widespread that, in the province of Québec, Canada, where these birds lived, chimney swifts became quite rare as the direct result of this one tragic event. In the following year, roost counts declined by an average of 62% and the total chimney swift population is estimated to have decreased by half.

Surprisingly, we don’t really have much robust data for how storms affect bird populations — until they become vanishingly small. But researchers studying sooty terns, Onychoprion fuscatus, which are plentiful in the Atlantic, report a strong positive correlation between “wrecked” individuals found throughout the Caribbean and the number of tropical storms, particularly hurricanes (ref). These data are being used to build computer models that may help to more precisely predict storm-caused mortality for seabirds.

Adult sooty tern (Onychoprion fuscatus), on Tern Island, French Frigate Shoals. This is a migratory seabird that nests on islands on or near the equator in the Atlantic Ocean.
(Credit: Duncan Wright / USFWS / Public domain.)

Hurricanes can have serious impacts on sedentary bird species, particularly those that live on islands or that have small populations. For example, already driven to the point of extinction by widespread habitat destruction and poaching for the pet trade, the few remaining Iguaca, or Puerto Rican parrots, Amazona vittata, were then faced with Hurricane Hugo in 1989. This storm pummelled the island of Puerto Rico, destroying much of the habitat in the Luquillo mountains, which is the last refuge for these critically endangered parrots. By the end of that year, it was determined than only 22 Puerto Rican parrots had survived (ref). 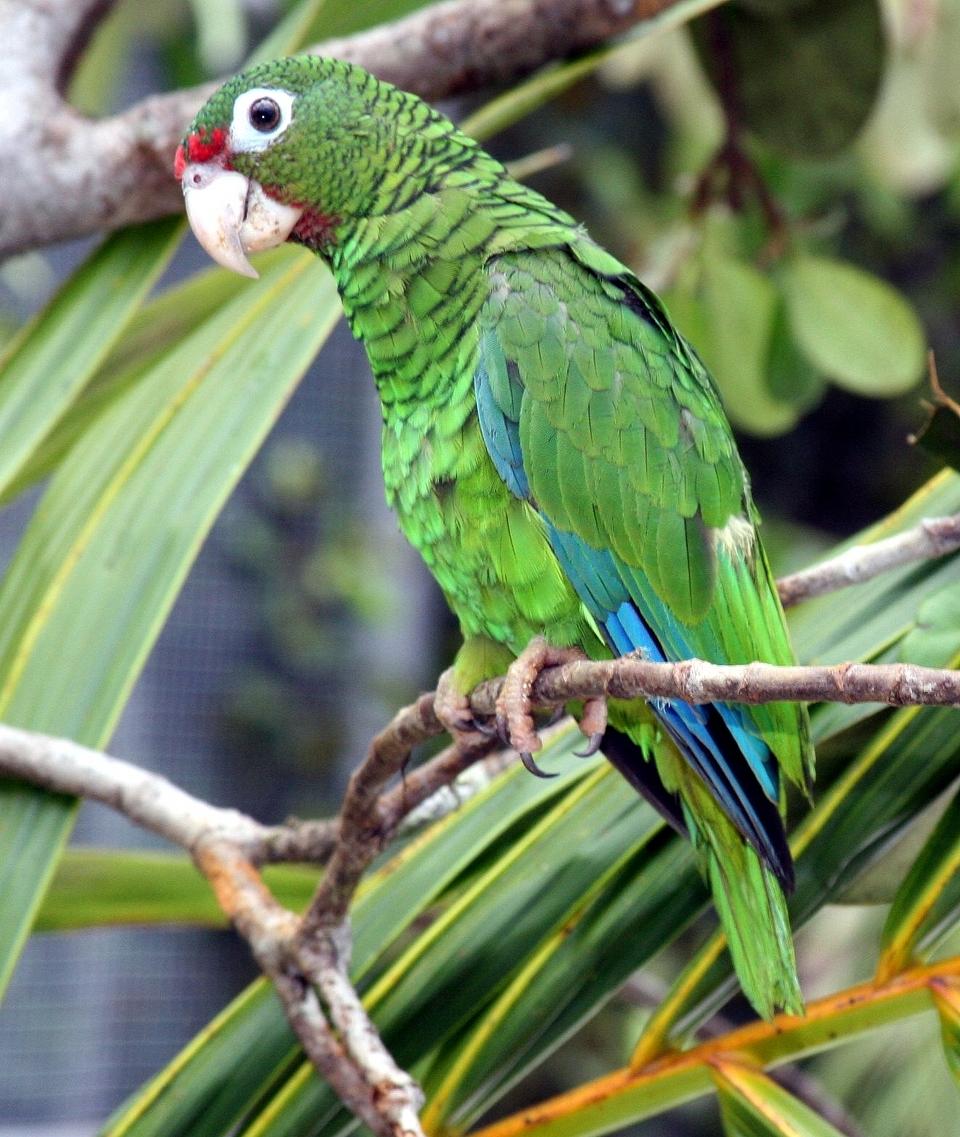 The critically endangered Cozumel thrasher, Toxostoma guttatum, was even more seriously impacted: we still are not sure whether this island species survived a double hit by Hurricanes Emily and Wilma in 2005.

Of course, if birds survive a hurricane, and somehow manage to find their way back home, they are then faced with profound habitat destruction that can persist for decades. In 1989, Hurricane Hugo decimated much of the remaining old-growth forest that is vital habitat for endangered red-cockaded woodpeckers, Leuconotopicus borealis. According to the National Wildlife Federation, Hurricane Hugo damaged 4.5 million acres of state forest throughout South Carolina (ref), and reduced 477 colonies of red-cockaded woodpeckers to just 100 in the Francis Marion National Forest. 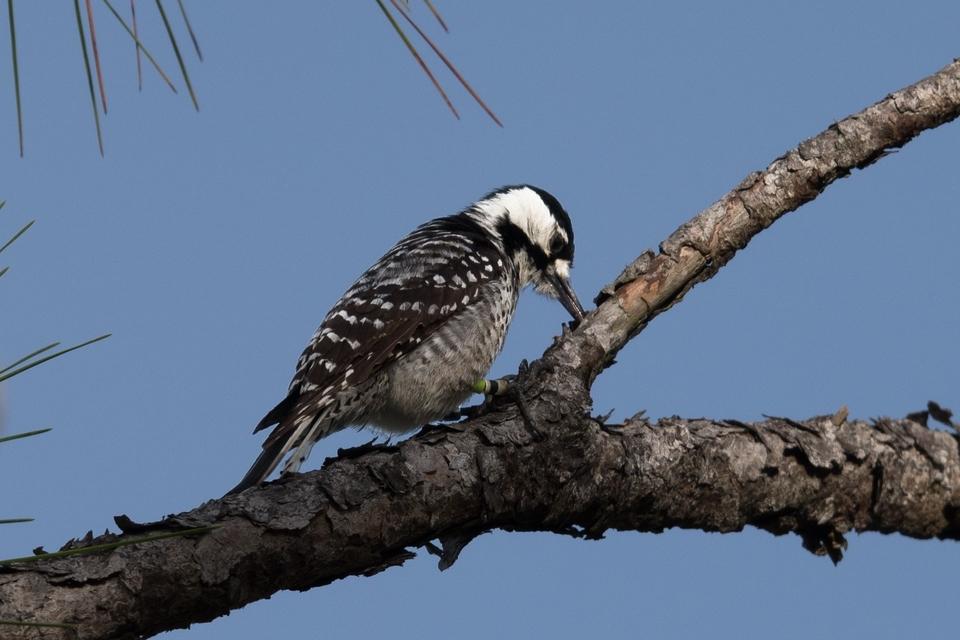 This same hurricane also devastated coastal and dune habitats that a variety of shorebirds and seabirds (at least some of which are endangered or critically endangered) depend upon for food or for nesting sites.

Throughout the millennia, birds have developed a variety of strategies for coping with large, severe storms like hurricanes. But thanks to people and to our bad behaviors, like habitat destruction, hunting, and poaching, birds have fewer and fewer places to flee for safety, and this makes the effects of hurricanes more extreme than they otherwise would be.