The Leshan Giant Buddha: Largest Stone Buddha In The World

by Bryan Hill: Not far from the city of Chengdu in Sichuan Province, China, sits the Leshan Giant Buddha statue… Carved into the side of Mt. Lingyun, the colossal statue is over 1,300-years-old and is considered to be the largest stone Buddha in the world, and by far the tallest pre-modern statue. The site attracts millions of people every year, including Buddhist pilgrims, making it something of a sacred destination and an ancient wonder of the world.

The Leshan Giant Buddha statue (also known as Dafo), is located to the east of Leshan City and sits at the junction of three rivers; the Min River, Qingyi River, and Dadu River.  It faces the sacred Mount Emei with the rivers flowing below its feet and depicts a stout, smiling monk, calmly sitting, resting his hands upon his knees with heavy-lidded eyes gazing across the river. The statue is believed to be Maitreya, a Buddha and disciple of Sakyamuni, who is thought to have been the founder of Buddhism, symbolizing brightness and happiness.

Worshiping Maitreya was especially popular between the 4th and 7th Centuries.  Today, images of him can still be found in many Buddhist temples throughout China and the Leshan statue is considered the most inspiring of them all.

The architecture of the Leshan Giant Buddha

The appeal of the Buddha lies not only in its size but in its architectural craftsmanship.  The entire statue is made of stone, except for the ears which were crafted out of wood, then affixed, and covered with clay. The Buddha’s hair is arranged in special spiraled curls with 1,021 twists that have been skillfully embedded in the head. 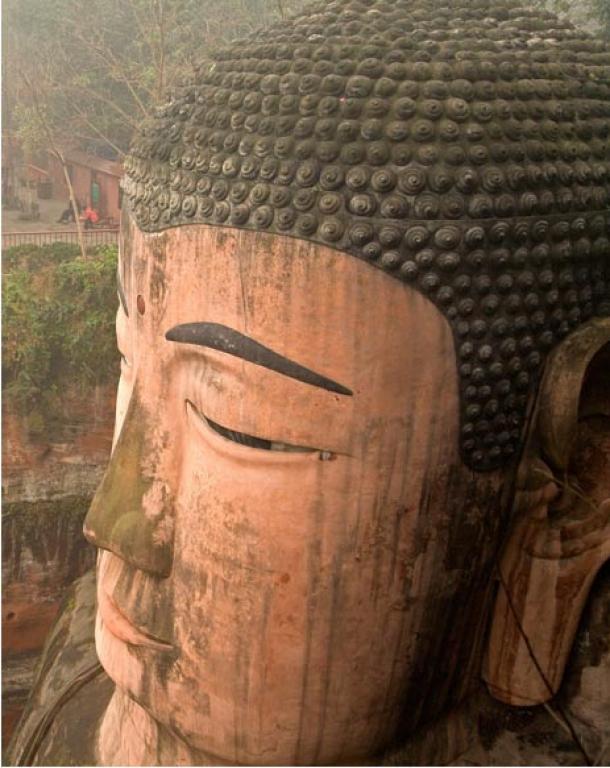 The statue is ten stories high, and if the statue stood upright, it would be almost eye to eye with the Statue of Liberty. The Buddha is so enormous that it is alleged that 100 monks could sit on one foot. Measuring 71 meters tall (233 feet), the statue has a symmetrical posture, creating a gracefully relaxed image. Its head is 15 meters (50 feet) high, its shoulders 28 meters (92 feet) wide, and its smallest toenail can accommodate a seated person.  Each eyebrow alone is 5.5 meters (18 feet) while its nose is 6 meters (20 feet) long. A large pair of ears, measuring seven meters (23 feet), is capable of holding two people inside. 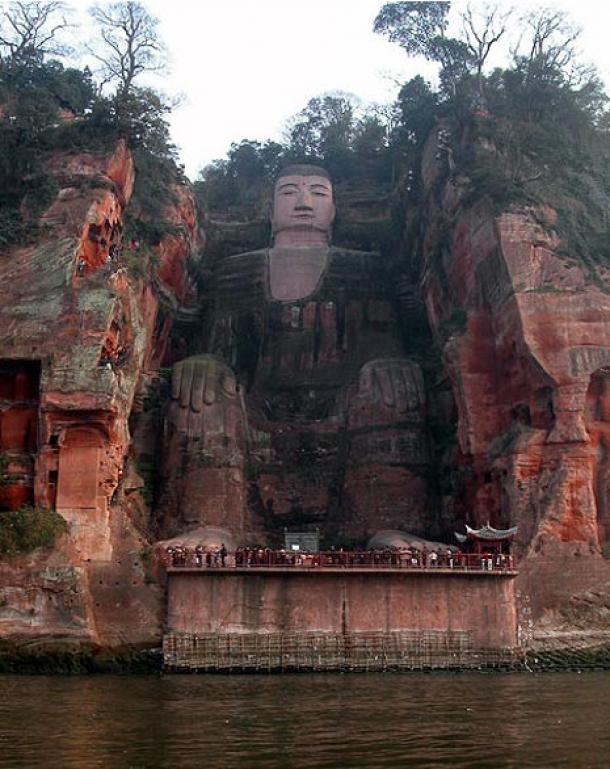 The ingenious system of water drainage

Several drainage passages hidden inside the Buddha’s hair, collar, chest, and back of the ears, have prevented the statue from serious erosion and weathering over the millennia. The drainage system of the Giant Buddha is a complex system made up of hidden gutters and channels, which carry away rainwater and keep the inner parts dry. This is why the great Buddha has survived intact up until modern times. Compared to when it was initially completed, the statue looks quite different from how it looks today. It once sat in a grand 13-story wooden pavilion which protected the carving from erosion. However, the pavilion was eventually destroyed at the end of the Ming Dynasty, exposing the statue to the elements.

The Origins of Dafo

The Leshan Giant Buddha statue is said to have been built to calm the turbulent waters that plagued passing boats and killed many people each year. So, in the Tang Dynasty, a monk named Hai Tong, decided to carve a giant statue beside the river, hoping it would appease the river gods and save more local people’s lives. With this belief, the Hai Tong Monk begged for 20 years to acquire enough funds to begin his work.  According to legend, when some local government officials wanted to get large amounts of money from Hai Tong, he said they could have his eyeball but not the money raised for the Buddha statue. When government funding for the project was threatened, the monk is said to have gouged out his own eyes to show his sincerity and devotion to the cause. The officials were scared away, and Hai Tong saved the money and started the project in 713 AD. The project was half finished when he passed away and two of his disciples were left to continue the work. The project was finally completed 90 years later by the local governor in 803 AD. Since so much stone was removed from the cliff face and deposited into the river below during the construction, the currents of the rivers were, in fact, altered by the statue, making the waters safe for passing ships. 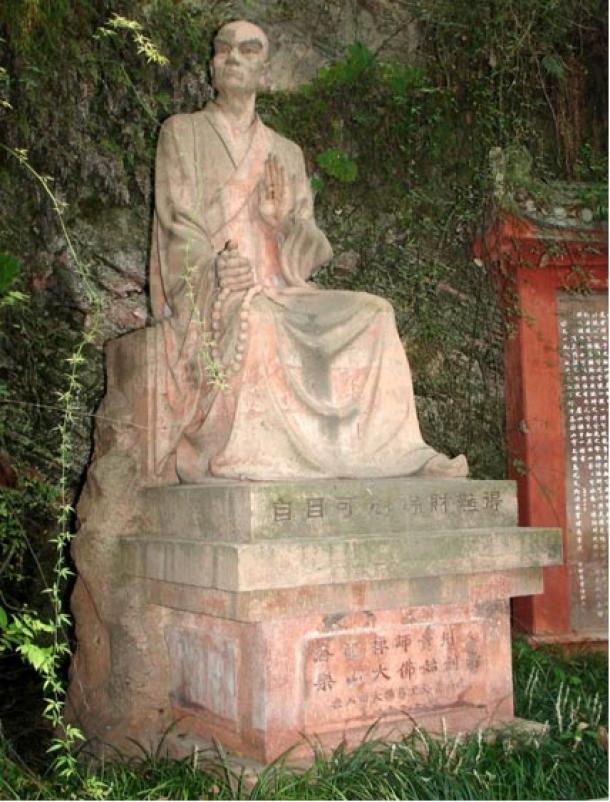 The Leshan Giant Buddha: A Museum of Buddhist Carvings

As the biggest carved stone Buddha in the world, Dafo is featured in Chinese poetry, song and story. For the ancient Chinese, building a statue of this size and stature was a way of thanking their gods. Even after its completion, people continued to carve Buddhas, small ones, all around this massive statue. On the cliffs beside the Giant Buddha, there are two carved stone warriors in battle robes, holding a halberd (a combined spear and battle-ax).  Besides the Giant Buddha, are thousands of other carved Buddhas, making the mountain a museum of Buddhist carvings. Han Dynasty cliff tombs have also been found at the site and there is an onsite temple and shrine dedicated to Hai Tong near the Buddha. Mortuary artifacts have been found here as well making this area particularly important for archaeologists. 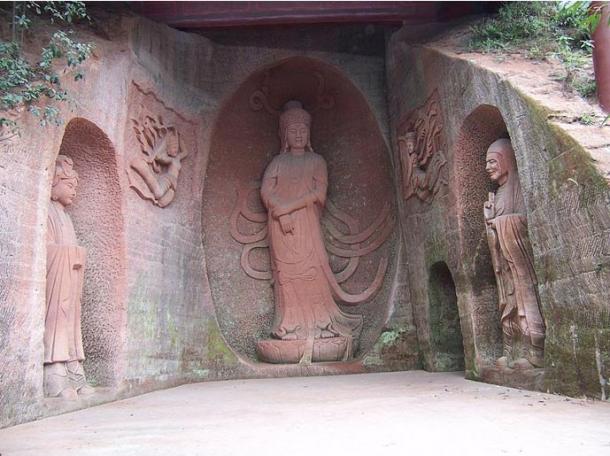 Today, erosion is the biggest threat to the Leshan Giant Buddha’s survival. The statue was nearly destroyed by the erosion of wind and rain before 1963, when the Chinese government began repair work and protection. In 1996, the World Heritage Committee of UNESCO inscribed the Mount Emei Scenic area and the Leshan Giant Buddha Scenic Area on their World Heritage List as a mixed cultural and natural property of the world. Since 2001, it has been rumored that the equivalent of over 40 million U.S. dollars has been spent to keep it intact.