by Bobby Magill: The electric power industry is turning away from coal, and clean energy is growing again in the U.S. 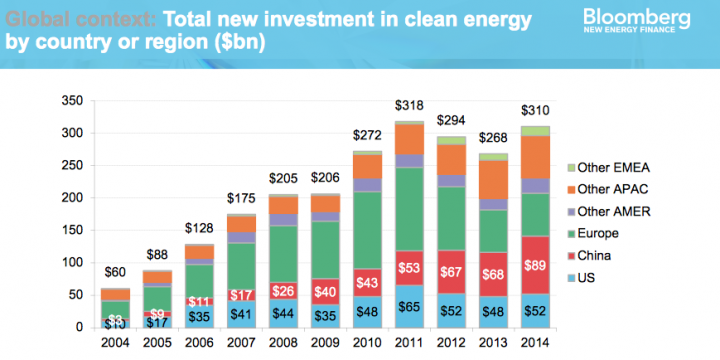 as investments in renewables increased in 2014 after a two-year decline.  Those are the conclusions of the 2015 Sustainable Energy in America Factbook report released jointly Wednesday by Bloomberg New Energy Finance and the Business Council for Sustainable Energy, which ranks the U.S. as second in the world behind China for clean energy investments in 2014.

“Against the backdrop of a surging economy and crumbling oil prices, major trends around decarbonization and improving energy productivity continued in the United States,” Michael Di Capua, head of Americas research for Bloomberg New Energy Finance, said in a statement.

Bloomberg highlights the decarbonization of the U.S. power sector, showing that 93 percent of all new U.S. electric power production capacity constructed since 2000 has come from lower-carbon sources including natural gas, wind, solar and other renewables.

Though the climate benefits of switching to natural gas from coal are debated among scientists who worry about methane emissions from natural gas infrastructure affecting the climate, Bloomberg’s report touts U.S. progress toward replacing coal with natural gas.

Coal represented 39 percent of total U.S. power generation in 2014, the same as in 2013, and 2 percent higher than 2012, the year in which use of natural gas by the electric power sector peaked as natural gas prices hit historic lows.

But Bloomberg said that despite the use of coal gaining slightly or remaining flat over the past three years, long-term trends are showing the U.S. power sector is eschewing coal for cleaner energy sources.

Renewables have grown from about 8 percent of total U.S. electric power generation in 2007 to nearly 13 percent in 2014, a steady rise that shows no sign of slowing. Wind and solar power generating capacity more than tripled between 2008 and 2014, the report says.

Wind-farm construction rebounded in 2014 following the expiration of the wind Production Tax Credit in 2012. That year, nearly 14 gigawatts of new wind power production capacity were built, then fell to only 1 gigawatt of new wind power capacity in 2013, or enough to power about only 200,000 homes.

The upward trend of large-scale wind power generating capacity in the U.S., which peaked in 2012 before the expiration of the Production Tax Credit. New wind installations sharply declined in 2013 and rebounded in 2014. Credit: Bloomberg New Energy Finanace and the Business Council for Sustainable Energy.

The U.S. Energy Information Administration is forecasting that 90 percent of the coal-fired power plants expected be shuttered by 2020 will actually be shut down by next year in order to avoid having to comply with new pollution standards that require expensive desulfurization equipment to be installed.

States are also considering how they will comply with the Obama administration’s proposed Clean Power Plan, which, if approved, would require CO2 emissions cuts from existing coal-fired power plants.

As the electric power sector continues decarbonizing, the U.S. transportation sector is seeing its dependence on crude oil decreasing, mainly because of fuel efficiency and Americans choosing to drive less, the report says.

The U.S. economy is growing while energy production overall in the U.S. is growing, Lisa Jacobson, president of the Business Council for Sustainable Energy, said in a statement.

“All of this is happening as investment in clean energy continues to grow and as new natural gas infrastructure continues to come online,” she said. “These are strong positive signs for America’s economy and environment.”