Example of Teaching
“The curious paradox is that when I accept myself just as I am, then I can change.”

A Way of Being 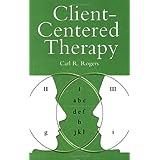 Carl Rogers (1902-1987) was a humanistic psychologist agreed with most of what
Maslow believed, but added that for a person to “grow”, they need an
environment that provides them with genuineness (openness and self-disclosure),
acceptance (being seen with unconditional positive regard), and empathy (being
listened to and understood).  He wrote 16 books and more than two hundred
articles and received many honors, including the Distinguished Scientific
Contribution Award of the American Psychological Association.

Rogers believed that every person can achieve their goals, wishes and desires in life.
When, or rather if they did so, self actualization took place.  This was
one of Carl Rogers most important contributions to psychology and for a person
to reach their potential a number of factors must be satisfied.

Rogers believed that people are inherently good and creative and they become
destructive only when a poor self-concept or external constraints override the
valuing process.  Carl Rogers believed that for a person to achieve
self-actualization they must be in a state of congruence.

One of Rogers’s most significant contributions involved his concern for the education
of children and adolescents, as well as adults.  Rogers was also at the
forefront of psychology, engaging in discussions with international scholars.