Example of Teaching
“If you plan on being anything less than you are capable of being, you will probably be unhappy all the days of your life.”

The Farther Reaches of Human Nature 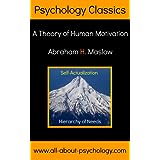 Hierarchy of Needs: A Theory of Human Motivation

Abraham Harold Maslow (April 1, 1908 – June 8, 1970) was an American psychologist who was best known for creating Maslow’s hierarchy of needs and changing the view of human nature and human possibilities.  His influence continues to grow, especially in the fields of health, education, and management theory.  The basis of his lifelong research and thinking about mental health and human potential was inspired by two mentors, anthropologist Ruth Benedict and Gestalt psychologist Max Wertheimer, whom he met while teaching at Brooklyn College.

Maslow began taking notes about them and their behavior.  He wrote extensively on the subject, borrowing ideas from other psychologists but adding significantly to them, especially the concepts of a hierarchy of needs, metaneeds, self-actualizing persons, and peak experiences. Maslow became the leader of the humanistic school of psychology that emerged in the 1950s and 1960s, which he referred to as the “third force” beyond Freudian theory and behaviorism.

Maslow saw human beings’ needs arranged like a ladder. The most basic needs, at the
bottom, were physical — air, water, food, sex. Then came safety needs –security, stability — followed by psychological, or social needs — for belonging, love, acceptance. At the top of it all were the self-actualizing needs — the need to fulfill oneself, to become all that one is capable of becoming. Maslow felt that unfulfilled needs lower on the ladder would inhibit the person from climbing to the next step.

Maslow used the term metamotivation to describe self actualized people who are driven by innate forces beyond their basic needs, so that they may explore and reach their full human potential.Peak experiences are profound moments of love, understanding, happiness, or rapture, when a person feels more whole, alive, self-sufficient and yet a part of the world, more aware of truth, justice, harmony, goodness, and so on. Self-actualizing people have many such peak experiences.