Example of Teaching
“I believe that we are here to contribute love to the planet – each of us in our own way.”

A Book of Miracles: Inspiring True Stories of Healing, Gratitude, and Love 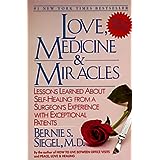 Love, Medicine and Miracles: Lessons Learned about Self-Healing from a Surgeon's Experience with Exceptional Patients

For many, Dr. Bernard Siegel—or Bernie, as he prefers to be called— has cared for and counseled innumerable people whose mortality has been threatened by illness, Bernie embraces a philosophy of living and dying that stands at the forefront of the medical ethics and spiritual issues our Society grapples with today. He continues to break new ground in the field of healing, supporting changes in medical education to “humanize” medical practice.

Bernie was born in Brooklyn, NY, and attended Colgate University and Cornell University Medical College. He graduated with honors and holds membership in two scholastic honor societies, Phi Beta Kappa and Alpha Omega Alpha. He trained to become a surgeon at Yale New Haven Hospital, West Haven Veteran’s Hospital and the Children’s Hospital of Pittsburgh. In 1989, Bernie retired from Yale as an Assistant Clinical Professor of General and Pediatric Surgery to speak to patients, their families and caregivers.

Bernie’s writings in the 12 books he has published so far reflect his passion to reach people struggling with all of life’s challenges—not just the physical ones—so that each person can live life fully with the understanding that, as Bernie reminds us, “We only have today.” Believing that we are all here to love one another, Bernie has crafted eternal truths and the timeless wisdom of the ages into his reflections on the true stories of his patients in much of his work.

In 1978, nearly a decade before retirement, Bernie launched ECaP—Exceptional Cancer Patients, in which he and his wife and co-worker, Bobbie, remain active today. ECaP is a therapeutic approach Bernie calls Carefrontation that helps patients interpret their drawings, dreams and images to express their feelings about the healing process. The physical, spiritual, and psychological benefits that emerge strengthen the immune system, a direct response to the power of the Mind-Body Connection about which Bernie has written and spoken extensively. Bernie believes that in the next decade, the roles of consciousness, spirituality, non-local healing, body memory, and heart energy will all be explored more intensively as scientific subjects.

All along the way, Bernie’s wife, Barbara H. Siegel—or Bobbie—has been a mainstay at workshops on helping patients interpret their drawings and especially, with a talent for very funny one-liners, at workshops on the healing power of humor.  Bobbie and Bernie raised five children together and now, as then, live in a home full of children’s things (for their eight grandchildren), pets, and especially love.