On Thursday (April 19), NASA delivered the shuttle Discovery — the fleet leader with 39 space missions under its belt — to the Smithsonian Institution’s National Air and Space Museum in Washington, D.C. Discovery will help teach visitors about the nation’s manned spaceflight past, which promises to be much different than its future.

NASA is now looking to the private sector to ferry its astronauts to and from theInternational Space Station, and it’s hoping that at least two companies have orbital taxis up and running by 2017. The hope is that competition can bring costs down, helping open up the final frontier for further exploration and exploitation.

“We look to keep competition for as long as we can, to service space station with crew and cargo as soon as possible,” NASA deputy chief Lori Garver told reporters last week. “We want to fly the space station longer than 2020; people have talked about this with our international partners. But we need to get the costs of servicing it and operating it down.” [Top 10 Private Spaceships Headed for Reality]

NASA retired its space shuttle fleet in July 2011 after 30 years of orbital service. The United States is now  dependent upon Russian Soyuz vehicles to ferry its astronauts to and from the station.

But NASA intends this dependence to be temporary. The agency is encouraging a handful of Americanprivate spaceflight companies to develop their own manned spaceships. Over the past two years, NASA’s Commercial Crew Development program has given a total of $320 million to four American aerospace firms: SpaceX, Blue Origin, Sierra Nevada and Boeing.

SpaceX is using its share of the money to upgrade its Dragon capsule, which NASA also wants to make robotic cargo runs to the space station. In fact, Dragon is slated to launch on an unmanned demonstration mission next Monday (April 30), during which it will berth with the orbiting lab and offload some cargo — a first for a private spaceship.

If the flight goes well, Dragon could begin making bona fide supply runs to the station later in the year, SpaceX officials have said. The company holds a $1.6 billion NASA contract to fly 12 such missions in the coming years.

SpaceX has said that a crewed version of Dragon, which is designed to carry up to seven astronauts, could be operational within three years. Its progress will likely be accelerated by the robotic version’s supply missions, according to company founder and CEO Elon Musk.

“Because there are so many similarities between the cargo version of Dragon and the crew version of Dragon, we’re learning a great deal about crew transport when we do a cargo mission,” Musk told reporters last week.

SpaceX will use its own Falcon 9 rocket to blast Dragon — in both its manned and unmanned configurations — into low-Earth orbit. [Photos: Dragon, SpaceX’s Private Spacecraft] 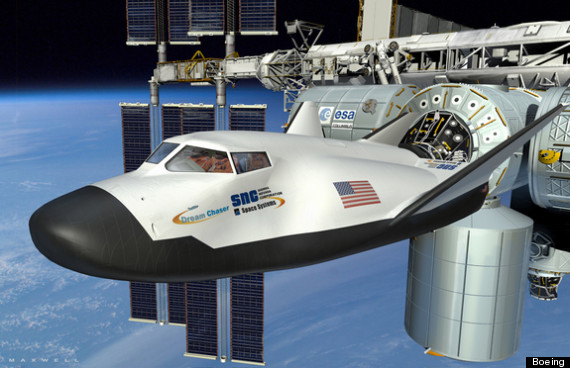 Like SpaceX, aerospace giant Boeing is developing a capsule, which it calls the CST-100. This vehicle will also be capable of carrying seven astronauts, and company officials say it should be ready to go by 2015 or 2016. At least initially, the CST-100 will be carried aloft by an Atlas 5 rocket, built by United Launch Alliance.

Blue Origin, which was established by billionaire Amazon.com founder Jeff Bezos, is working on a biconic craft called the Space Vehicle. The SV can hold seven crewmembers, and the secretive company has said the spaceship should become operational sometime between 2016 and 2018.

Blue Origin also plans to rely on the Atlas 5 at first, but it hopes to transition eventually to a rocket of its own design. This launch vehicle would include a reusable first-stage booster that returns to Earth via a vertical, powered landing.

Sierra Nevada’s entry in the space taxi competition evokes the space shuttle, but on a much smaller scale. The Dream Chaser is a small space plane designed to carry a crew of seven and launch atop an Atlas 5. The mini-shuttle is on track to begin operations by 2015, according to Sierra Nevada officials.

NASA had originally hoped to transition to private astronaut taxis by 2015. However, Congress gave the agency just $406 million for commercial crew development in 2012, less than half the $850 million that NASA requested.

This budget shortfall pushed NASA’s timeline back two years, and another delay may be in the offing.

NASA asked for $830 million for commercial crew in the 2013 budget, but it appears unlikely to get anywhere near that amount. Bills recently approved by committees in the House and Senate would give just $500 million and $525 million, respectively, to NASA’s commercial crew efforts.

“We feel quite strongly that we require as close to $830 million” as possible, Garver said last week, “in order to reduce that gap of time that we are outsourcing our space transportation of our astronauts to Russia.”