Sacred plants of the Maya forest

by Matt Walker:  Some of the Central American rainforest’s hidden treasures are being revealed by the Maya, more than a millennium after their passing. Art depicting life: a Mayan pot inspired by the trunk of a Ceiba tree.

A study of the giant trees and beautiful flowers depicted in Maya art has identified which they held sacred.

Created during the Maya Classic Period, the depictions are so accurate they could help researchers spot plants with hitherto unknown medicinal uses.

The research is published in the journal Economic Botany.

Plants played a significant role in the ecology, culture and rituals of the Maya people, whose artwork reflected the rich diversity of plant life around them.

But while numerous examples of such artwork exist, few have been studied to see exactly which plants they depict.

So natural historian and archaeologist Charles Zidar of Missouri Botanical Garden in St Louis, US, and botanist Wayne Elisens of the University of Oklahoma, Norman, US, decided to find out.

They hope to discover plants of importance to the Maya that are either unknown to modern people, or have since been forgotten.

“The Maya have lived and used rainforest plants to heal themselves for thousands of years.  We are just beginning to understand some of their secrets”  Archaeologist Charles Zadir

The team’s first analyses focused on artwork produced within the southern lowland region of the Maya, located in the modern countries of Belize, Guatemala and Mexico.

They examined more than 2,500 images of Maya ceramics created within the Maya Classical Period of AD 250 to 900.

The images are held within an image collection taken by Justin and Barbara Kerr, curated by the Foundation for the Advancement of Mesoamerican Studies, based in Crystal River, Florida, US.

In particular, the two men searched for depictions of bombacoids, a diverse lineage of trees in the Neotropics characterised by swollen or spiny trunks and big, colourful, conspicuous flowers with long folding petals.

“I was surprised that a variety of plants from this family were depicted,” says Zidar.

Trees of the Ceiba genus can grow up to 50m tall, with swollen trunks producing large buttresses. 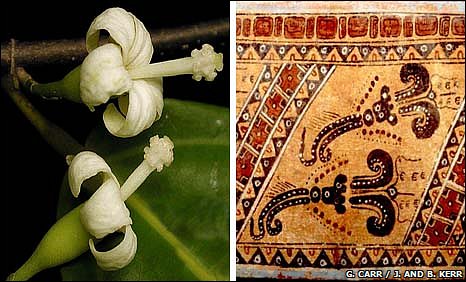 White blooms on ceramic: Quararibea painted on a cup for drinking chocolate

To the Maya, the ceiba tree was sacred, mapping out the upper, middle and underworlds.

Considered the “first tree”, or “world tree”, the ceiba was thought to stand at the centre of the Earth. Modern indigenous people still often leave the tree alone out of respect when harvesting forest wood.

The thorny trunks of the ceiba tree are represented by ceramic pots used as burial urns or incense holders, which are designed in a strikingly similar fashion. Two other tree species, the Provision Tree (Pachira aquatica) and the Shaving Bush Tree (Pseudobombax ellipticum) are also copied into the designs of similar pots.

On cacao pots and a plate for holding tamales, made from dough, the Maya drew flowers of either P. ellipticum or P. aquatica. On the cacao pot, the flowers seem to form part of the headdress of a high ranging individual.

Smaller white-flowered blossoms of Quararibea funebris or Q. quatemalteca also appear to adorn another vessel used for cacao drinking. The Maya used this species to flavour and froth cacao beverages so it is appropriate for them to represent the plant on the vessel, says Zidar.

“It was previously thought that only the ceiba tree was of great importance,” says Zidar. 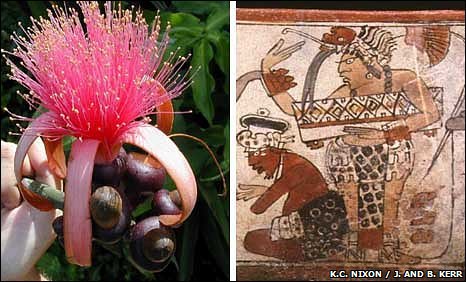 A Pseudobombax flower inspires a headdress worn by the Maya elite

“It has amazed me that so many plants are depicted. These plants are not as stylised as previously though, and thus you can name the plant family, genus and even the species.”

Zidar is continuing the work, expanding it further to find out which animals as well as plants were considered of high importance by the Maya people. He also hopes the research will unveil secrets known to the Maya that have become lost in time.

“The Maya have lived and used rainforest plants to heal themselves for thousands of years. We are just beginning to understand some of their secrets.”

“By determining what plants were of importance to the ancient Maya, it is my hope that identified plants can be further studied for pharmaceutical, culinary, economic and ceremonial uses. More should be done to conserve large tracts of forest in order to properly study theses plants for their value to mankind,” he continues.

“This research has already been of interest to pharmaceutical companies that are looking to extract alkaloids from plants that were important to the ancient Maya.”