Your Body Wasn’t Built To Last: A Lesson From Human Mortality Rates

What do you think are the odds that you will die during the next year? This startling fact was first noticed by the British actuary Benjamin Gompertz in 1825 and is now called the “Gompertz Law of human mortality.” Your probability of dying during a given year doubles every 8 years. For me, a 25-year-old American, the probability of dying during the next year is a fairly miniscule 0.03% — about 1 in 3,000. When I’m 33 it will be about 1 in 1,500, when I’m 42 it will be about 1 in 750, and so on. By the time I reach age 100 (and I do plan on it) the probability of living to 101 will only be about 50%. This is seriously fast growth — my mortality rate is increasing exponentially with age.

And if my mortality rate (the probability of dying during the next year, or during the next second, however you want to phrase it) is rising exponentially, that means that the probability of me surviving to a particular age is falling super-exponentially. Below are some statistics for mortality rates in the United States in 2005, as reported by the US Census Bureau (and displayed byWolfram Alpha):

This data fits the Gompertz law almost perfectly, with death rates doubling every 8 years. The graph on the right also agrees with the Gompertz law, and you can see the precipitous fall in survival rates starting at age 80 or so. That decline is no joke; the sharp fall in survival rates can be expressed mathematically as an exponential within an exponential:

Exponential decay is sharp, but an exponential within an exponential is so sharp that I can say with 99.999999% certainty that no human will ever live to the age of 130. (Ignoring, of course, the upward shift in the lifetime distribution that will result from future medical advances)

Surprisingly enough, the Gompertz law holds across a large number of countries, time periods, and even different species. While the actual average lifespan changes quite a bit from country to country and from animal to animal, the same general rule that “your probability of dying doubles every X years” holds true. It’s an amazing fact, and no one understands why it’s true.

There is one important lesson, however, to be learned from Benjamin Gompertz’s mysterious observation. By looking at theories of human mortality that are clearly wrong, we can deduce that our fast-rising mortality is not the result of a dangerous environment, but of a body that has a built-in expiration date.

If you had never seen any mortality statistics (or known very many old people), you might subscribe to what I call the “lightning bolt theory” of mortality. In this view, death is the result of a sudden and unexpected event over which you have no control. It’s sort of an ancient Greek perspective: there are angry gods carousing carelessly overhead, and every so often they hurl a lightning bolt toward Earth, which kills you if you happen to be in the wrong place at the wrong time. These are the “lightning bolts” of disease and cancer and car accidents, things that you can escape for a long time if you’re lucky but will eventually catch up to you.

The problem with this theory is that it would produce mortality rates that are nothing like what we see. Your probability of dying during a given year would be constant, and wouldn’t increase from one year to the next. Anyone who paid attention during introductory statistics will recognize that your probability of survival to age t would follow a Poisson distribution, which means exponential decay (and not super-exponential decay).

Just to make things concrete, imagine a world where every year a “lightning bolt” gets hurled in your general direction and has a 1 in 80 chance of hitting you. Your average life span will be 80 years, just like it is in the US today, but the distribution will be very different: 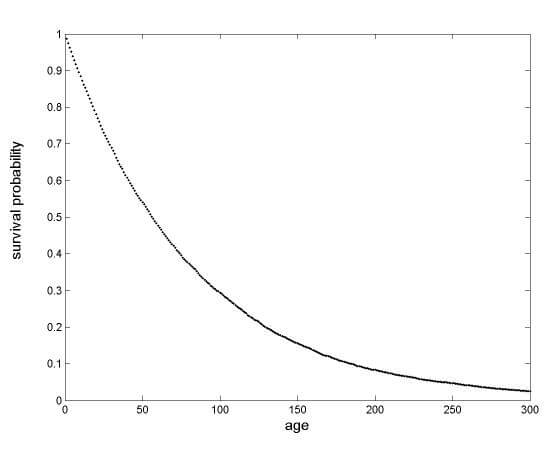 Your probability of survival according to the “Lightning Bolt Theory”

What a crazy world! The average lifespan would be the same, but out of every 100 people 31 would die before age 30 and 2 of them would live to be more than 300 years old. Clearly we do not live in a world where mortality is governed by “lightning bolts”.

I think most people will see pretty quickly why the “lightning bolt theory” is flawed. Our bodies accumulate damage as they get older. With each misfortune our defenses are weakened — a car accident might leave me paralyzed, or a knee injury could give me arthritis, or a childhood bout with pneumonia could leave me with a compromised immune system. Maybe dying is a matter of accumulating a number of “lightning strikes”; none of them individually will do you in, but the accumulated effect leads to death. I think of it something like Monty Python’s Black Knight: the first four blows are just flesh wounds, but the fifth is the end of the line. 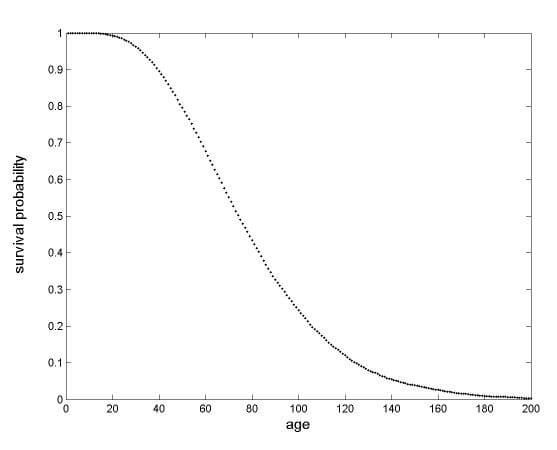 Your probability of survival according to the “accumulated lightning bolt” theory

Fortunately, this theory is also completely testable. And, as it turns out, completely wrong. Shown above are the results from a simulated world where “lightning bolts” of misfortune hit people on average every 16 years, and death occurs at the fifth hit. This world also has an average lifespan of 80 years (16*5 = 80), and its distribution is a little less ridiculous than the previous case. Still, it’s no Gompertz Law: look at all those 160-year-olds! You can try playing around with different “lightning strike rates” and different number of hits required for death, but nothing will reproduce the Gompertz Law. No explanation based on careless gods, no matter how plentiful or how strong their blows are, will reproduce the strong upper limit to human lifespan that we actually observe.

The cops and criminals inside your body

Like I said before, no one knows why our lifespans follow the Gompertz law. But it isn’t impossible to come up with a theoretical world that follows the same law. The following argument comes from this short paper, produced by the Theoretical Physics Institute at the University of Minnesota [update: also published here in the journal Theory in Biosciences].

Imagine that within your body is an ongoing battle between cops and criminals. And, in general, the cops are winning. They patrol randomly through your body, and when they happen to come across a criminal he is promptly removed. The cops can always defeat a criminal they come across, unless the criminal has been allowed to sit in the same spot for a long time. A criminal that remains in one place for long enough (say, one day) can build a “fortress” which is too strong to be assailed by the police. If this happens, you die.

Lucky for you, the cops are plentiful, and on average they pass by every spot 14 times a day. The likelihood of them missing a particular spot for an entire day is given (as you’ve learned by now) by the Poisson distribution: it is a mere

But what happens if your internal police force starts to dwindle? Suppose that as you age the police force suffers a slight reduction, so that they can only cover every spot 12 times a day. Then the probability of them missing a criminal for an entire day decreases to

. The difference between 14 and 12 doesn’t seem like a big deal, but the result was that your chance of dying during a given day jumped by more than 10 times. And if the strength of your police force drops linearly in time, your mortality rate will rise exponentially.

This is the Gompertz law, in cartoon form: your body is deteriorating over time at a particular rate. When its “internal policemen” are good enough to patrol every spot that might contain a criminal 14 times a day, then you have the body of a 25-year-old and a 0.03% chance of dying this year. But by the time your police force can only patrol every spot 7 times per day, you have the body of a 95-year-old with only a 2-in-3 chance of making it through the year.

The example above is tantalizing. The language of “cops and criminals” lends itself very easily to a discussion of the immune system fighting infection and random mutation. Particularly heartening is the fact that rates of cancer incidence also follow the Gompertz law, doubling every 8 years or so. Maybe something in the immune system is degrading over time, becoming worse at finding and destroying mutated and potentially dangerous cells.

Unfortunately, the full complexity of human biology does not lend itself readily to cartoons about cops and criminals. There are a lot of difficult questions for anyone who tries to put together a serious theory of human aging. Who are the criminals and who are the cops that kill them? What is the “incubation time” for a criminal, and why does it give “him” enough strength to fight off the immune response? Why is the police force dwindling over time? For that matter, what kind of “clock” does your body have that measures time at all?

There have been attempts to describe DNA degradation (through the shortening of yourtelomeres or through methylation) as an increase in “criminals” that slowly overwhelm the body’s DNA-repair mechanisms, but nothing has come of it so far. I can only hope that someday some brilliant biologist will be charmed by the simplistic physicist’s language of cops and criminals and provide us with real insight into why we age the way we do.

UPDATE: G&L reader Michael has made a cool-looking (if slightly morbid) web calculator to evaluate the Gompertz law prediction for different ages. If you want to know what the law implies for you in particular, and are not terribly handy with a calculator, then you might want to check it out.

This post was originally published on the Gravity and Levity Blog, and has been republished on Singularity Hub with permission from the author